Well, I'm having a hard time finding the forces through summation of moments in figure 4.14, the problem is, there's 3 hinges, which means there's 4 unknown forces. It's kinda hard to find the forces.

I tried researching about it but I can't find anything similar to this one.
Do you have any advice or do you know the right process to do so?

I really don't need the specific answer to the image below, I just want to know how to find the 4 unknown forces. 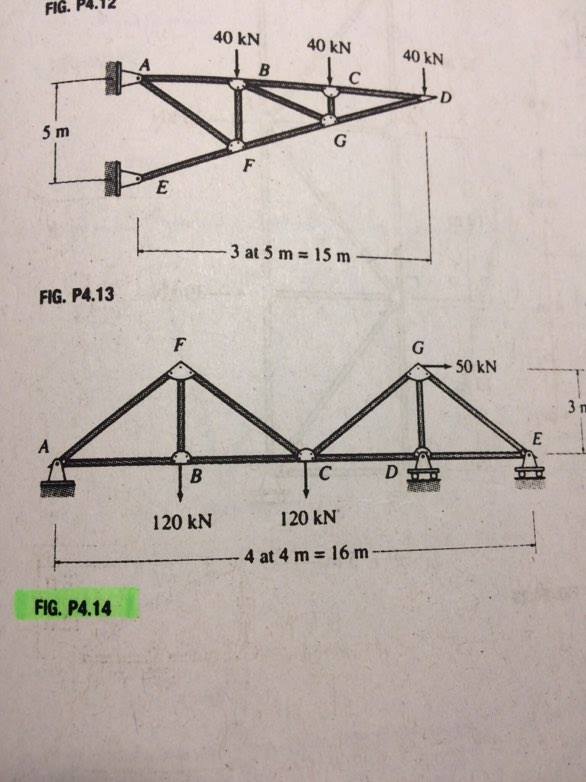 This question is far simpler than it looks. Since it has four supports (RX and RY at A plus RY at D and E), it would seem to be statically indeterminate, but it actually isn't.

One way of solving this would be to create a system of 14 equations and solving it. This would work, but ain't nobody got time for that.

A much simpler way of solving this is by observing that this is actually two trusses, with the one to the left being supported by the one to the right by the node at $C$ (much like a Gerber beam).

So let's start by solving the truss to the left, placing a support at $C$ representing the effect of the other truss. Also, since we know that the horizontal force at $G$ will be fully absorbed by $A_x$, let's apply that force at $C$. Due to the Gerber-beam-esque behavior of this truss, we don't have to worry about the bending moment generated by shifting the force this way. After all, that bending moment wouldn't have crossed over the hinge at $C$ and the force itself would indeed have been transmitted via $C$, so there's no issue.

We now move on to the rightmost truss, where we apply the fictitious value of $C_y$ (and notice that the horizontal force at $G$ is still there!):

This is also easy to solve for the reactions:

Given the reactions, the structure is also easy to solve for the internal values, so that's left as an exercise for the reader.

Here's a computer model of the structure, as well as of the individual truss models. Notice I had to place a fictitious RX at $E$ for the isolated rightmost truss to be stable to horizontal forces, so ignore its horizontal reaction. This also alters the axial compression values for the bottom chord, so just subtract 50 kN from the compression in that model to make it align with the original structure. 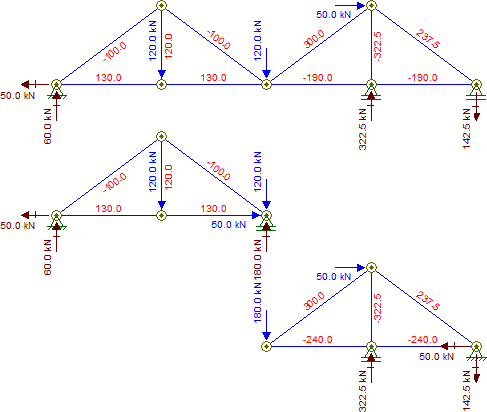 Assuming positive $x$ to be to the right, positive $y$ to be upwards, and all the bars to be in compression, we can write the force balance for each joint. In the end if a force turns out negative it means that the reaction force is in the negative $x$ or $y$ direction, or the bar is in tension.

What's going on here is that you have a what looks like Hyperstatic structure or Statically indeterminate structure, but isn't. Since you have a hinge in the middle, you get and extra equation. Cut your structure at the hinge and solve for your reactions. Here is an example video from youtube. Start by the left hand side triangular truss and make your way right.