I have a friend who is German and he says that wire mesh is much stronger than steel bars (rebar) and is mandated in Germany for reinforcing concrete slabs.

The question is, is that true, and why? 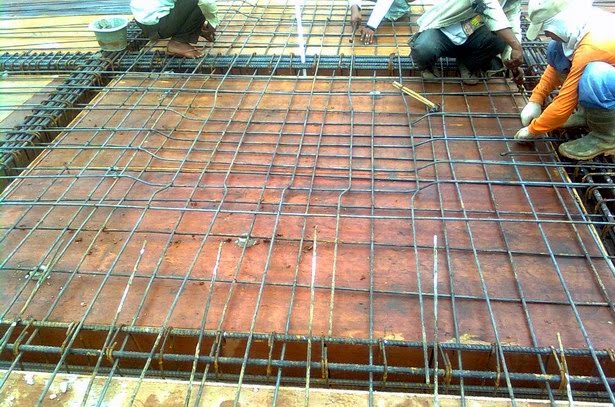 There are tied rebar beams, with rebar for floor reinforcement. Instead of the floor bars, we could instead install mesh between the beams. But what is the difference? Obviously we could buy 10.0 mm wire mesh @ 15 cm spacing, or we could install 10.0 mm bars at the same spacing (and let's say for the sake of argument that the same steel is used to make the mesh as we receive as bars). This would result in the same weight of steel per m3, However whereas the wire mesh is welded, the rebars are only tied with wire, which I guess has trivial strength.

[note, let us assume, for the sake of argument that the mesh and bars are properly placed]

Is there, in any case, an overwhelming advantage from the welds in the mesh, or can such advantage as there is be eliminated at relatively low cost, say by increasing the numbers of bars used by say 10%.

This is going to depend a great deal on what you want to achieve with the reinforcement.

I'm not aware of any ultimate strength increase for using welded wire mesh allowed by Eurocode 2 or ACI318. I had a quick look and couldn't find anything. I'm also sceptical that welded wire mesh is mandated for all slabs in Germany. However, it is common in Germany. I suspect that is more to do with construction practice than legislation, but I haven't worked in Germany so don't know for sure.

There are other advantages for using Welded Wire Mesh:

There are also disadvantages:

Wire mesh and rebar are roughly the same strength ; 55,000 psi yield ( both are available in various grades ). A heavy wire , 8 gage ( American Wire Gage) is 0.123" diameter . For an ordinary house , 0.5 " diameter rebar is common ( mine also has some 0.625" and 0.375" ) . Spacing is roughly the same , 6 in. between wire or rebar. So in a mesh structure there is 0.123" diameter steel and in a rebar structure there is 0.5" diameter steel in the same space. Without doing all the arithmetic; there is no way mesh is close to the strength of rebar. Mesh is used because it requires much less labor to install.

Not the answer you're looking for? Browse other questions tagged structural-engineering concrete reinforced-concrete or ask your own question.