How can the linear relationship between curvature and bending moments be verified?

As part of an experiment, I'm verifying the existence of a linear relationship between curvature and bending moments for three beams using different materials. The plotted data can be seen below. 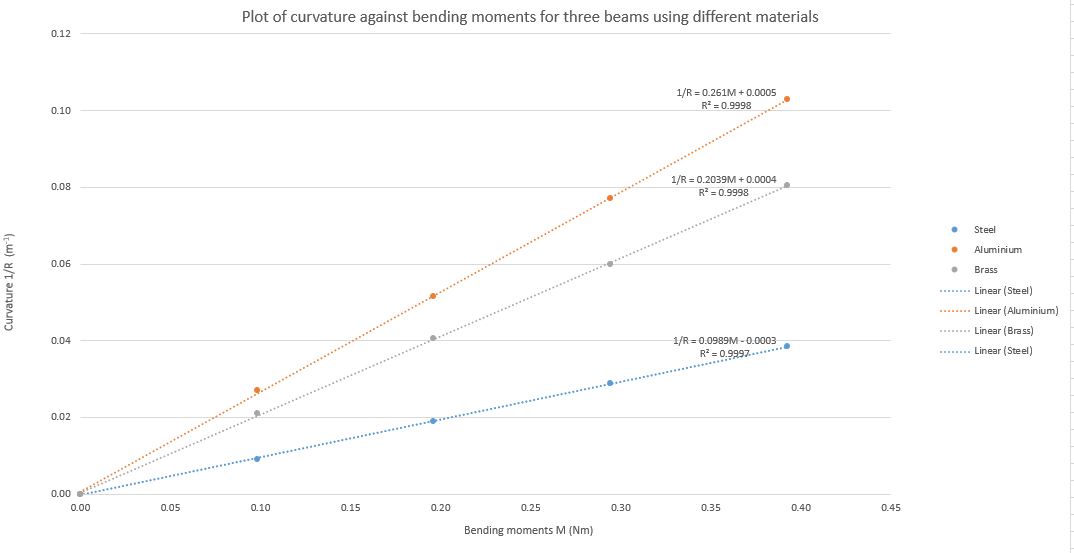 Visually, there is a very strong positive linear relationship. Visually, the residuals are small. Of the three populations of data, the lowest Pearson coefficient is 0.9998, the highest is 0.9999.

In terms of verifying this linear relationship in a lab report, need I discuss anything other than the regression lines being visually straight and the residuals being visually small? Is it necessary to calculate the Pearson coefficients? Should any other statistical tests be carried out such as the coefficient of determination?

Not knowing exactly how you did the experiment, I think you should explain carefully how you actually measured (and/or calculated) the curvature value, and how you know it really was "the radius of curvature" and not some other measure of "how curvy the beam was" which happens to give a linear plot.

Another question is whether your point at (0,0) is really "measured data" or just an assumption - and whether your test pieces really were "perfectly straight" before and after the experiment. If it isn't measured data, should it be on the graphs at all?

The question of how to verify that there is a linear relationship between two variables in your data is more an statistical question than an engineering one.

Pearson's correlation and coefficient of determination measure if your points are aligned. However, that's just a part of the answer because but they doesn't take in account the number of points. For example, if you only had two data points, Pearson's correlation would be 1 because there is one straight line that fits perfectly two points, whatever relation were between the involved variables.

A more complete answer would perform an hypothesis test in addition to correlation and coefficient of determination. The hypothesis test would compare the slope of the fitted line with the residuals to tell if that slope is significant. Unless you are interested in doing the maths by hand, I suggest using any statistical package to perform regression analysis - for example, R and RCommander are free, but even Excel has capabilities for it.

A more advanced test would be to adjust a non linear model - for example a second degree polynomial - and test if the second degree component is significant.

Taken into account all the uncertainties of experimental testing of actual specimens, these curves look prefectly linear to me. Discussing the results, you can report the excellent Person coefficients $\rho$ or the coefficients of determination $\rho^2$ to defend your experimental procedure, that sould be detailed too in your report (including curvature calculation as alephzero mentioned). Both coefficents should prove the strong correlation of the data, so you point is perfectly made. As far as i am concerned that would be enough to convince me.

Not the answer you're looking for? Browse other questions tagged mechanical-engineering statics beam modeling or ask your own question.

0
Relationship between Pressure and volume with Air
1
How to find the reaction forces, moments and the displacement of the fixed beam with a link?
0
Bending moments and stress in beams
2
Why two identical beams without being pinned together will share half of the bending moments?
1
Can bending moments for a combination of loads on a simple beam, be calculated by adding the individual B.M. of each load?
0
why the constants of the shear and bending are zero
0
How to get the bending moment for tie member?
1
Poisson relationship between area and length of electric wire