Do beams in a structure transmit to piers?

Sorry if the question is confusing as such, here's an image that makes it hopefully clearer: 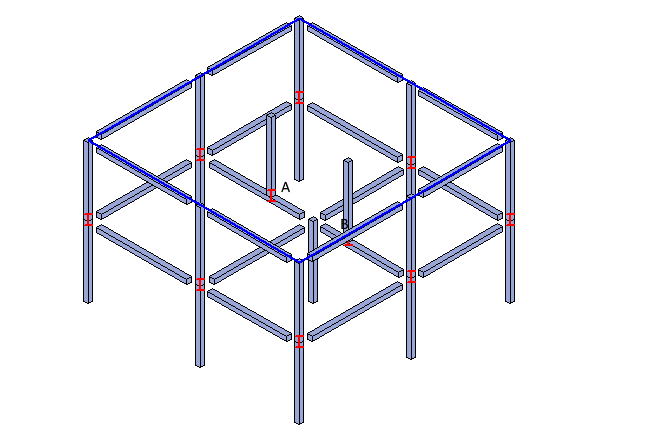 The second concrete slab is supported by eight of the 9 massive concrete piers, the ones around the perimeter, but the concrete pier in the middle is only one-storey high. Instead two less massive piers (labelled A & B) start from the height of the first elevated slab and support the second slab.

In this case, my questions are

Your first question is unanswerable. Any design is theoretically safe. Just create a massively thick slab with high-strength concrete and massive reinforcement and you can do just about anything.

That being said, your two stories are completely different. The first floor can be best described as four different slabs, all of which are fixed-fixed-pinned-pinned. The second floor is a single slab which is pinned around its entire perimeter and at two points near the center. The second floor will certainly suffer larger stresses.

The points where the slab is supported by the columns are especially critical. There will be massive shear stresses in that region, and specialized design will be necessary to handle those.

Yes, the beams will certainly require additional reinforcement. After all, in this situation they will need to absorb the load transferred by the columns. This will lead to a massive shear load in the beam and probably massive bending moment as well. If the support system from the first floor was repeated in the second floor, then the beams in the first floor obviously wouldn't suffer those loads and therefore would require less reinforcement.

Not the answer you're looking for? Browse other questions tagged structural-engineering concrete or ask your own question.

10
How is the design life of a reinforced concrete structure calculated?
8
Simple Finite Element Modeling of Wall Piers
6
Concrete formwork - best approach to counter uplift forces, for a freestanding pour?
2
Computing strain in beams
1
Excavation near existing structure
0
Why not a reverse bending in the slab?
3
Fun Force Problem - Basic Structure of Two beams supporting weight
1
A problem on beams