How do we solve a rigid body indeterminate structure?

In statics we consider the force deflection constraints (i.e. assuming the structure to be flexible) to generate equations in order to solve the extra degrees of indeterminacy. So, basically if we consider a rigid body that does not produce any deflection how do we get the reactions at the supports? Can they be determined? If not, basically what does it mean from an intuitive perspective? 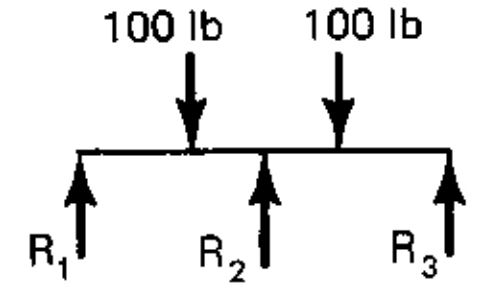 Say, now all the 3 reactions are due to a pin support. This way, in statics we equate the deflection caused by R1 to the deflection caused by the pair of 100 pound loads. This gives us R1. But in the process we are assuming the structure to be elastic. If the body is rigid, in this case can R1, R2 and R3 assume any values as long as the body is in equilibrium? But how is it possible?

For starters, as @alephzero mentioned in a comment, in the real world there are no rigid bodies, so this question is entirely theoretical. No matter how massive and rigid the beam, some infinitesimal deflection will always occur and that's all we need to calculate the beam as any other.

That being said, let's see how (or whether) we can solve this for rigid beams.

The force method for statically indeterminate structures has us remove constraints until we get to an isostatic structure, at which point we replace the removed constraints with forces according to the deformation or rotation they would have inhibited.

So, let's remove $R_1$. What happens then? The beam is perfectly rigid, so it's deflection at $R_1$ is null. Since there's no deflection to counter, this means that $R_1$ is itself null. If $R_1$ is null, by symmetry we can tell that $R_3$ would also have to be null, meaning $R_2$ will absorb the entirety of the forces.

Let's see what we get with the stiffness matrix method. Actually, never mind. The stiffness matrix has an $EI$ (or $EA$) in the numerator of every item, which would throw the entire matrix into infinity, making any calculation nonsensical.

So, the conclusion is clear: there is no numerical solution for an absolutely rigid structure.

But... what if the supports aren't rigid? Then the solution is trivial. Since the loading is symmetric, the beam will deform all spring supports equally (since it's infinitely rigid), meaning they will all have the same value: $R_1 = R_2 = R_3 = \dfrac{200}{3}$.

4
How to solve an overconstrained static free body diagram?
8
Vertical wave action on bridge
3
Replacing a straight rigid link by a curved rigid link
2
Why is the moment of forces on a rigid body in static equilibrium must be zero about any point, even if the position of that point is not on the body
2
Indeterminate beam with a guide at each end
1
Which method is better to solve indeterminate trusses, force or displacement method?
0
I can't even see how can i solve this truss question