What type of control system is this? open loop?

Suppose I have a liquid in a container, the type of liquid is such that it expands when its temperature rises. The contrainer is marked with scale to measure the height of liquid expanded. There is a controller that maintains the temprature at it desired value. Temprature sensor feedback the temprature value to generate error signal into the controller. But the main purpose of the system is to maintain the height which does not have any feedback sensor. The only way to find out is through scale reading which is done by human observer. To maintain the height, the observer changes set point temprature. So first, what is the actual name of this kind of system, an open loop system for height control? Second is this block diagram correct in control theory? 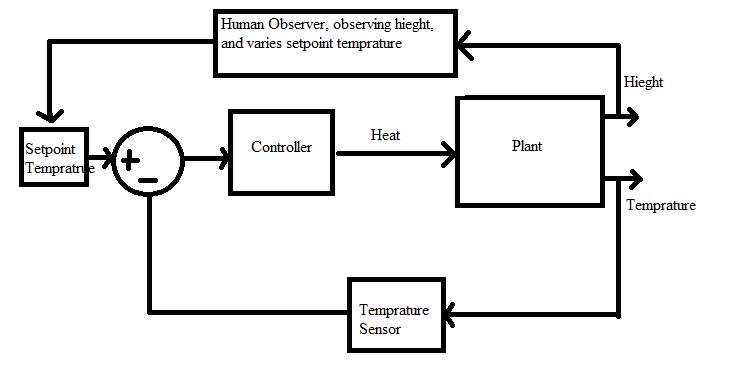 This system can be considered "closed loop," since the control input is being determined by some sort of feedback loop (even though the mathematical expression of the feedback loop through the operator is unknown). Also, yes the diagram you've shown is valid. I often work with control systems that have a human operator in the control loop, such as robotic teleoperation systems, and they are often shown as some black box operating on a feedback signal.

However, it would be difficult to apply any sort of control theory to your system without some sort of model of how the human operator reacts to the height of the liquid. Often you can make an assumption, like maybe the operator behaves like a proportional controller with a bit of noise (you would need to have solid justifications for any assumptions you make). Either way, in this case if you want to control the height of the fluid with any amount of precision, replace that operator with an ultrasonic rangefinder (or some other sensor) plus some variation on a PID controller.

Not the answer you're looking for? Browse other questions tagged control-engineering control-theory temperature pid-control feedback-loop or ask your own question.

6
Feedback control of two-link planar manipulator
1
What is the name of my feedback procedure in control system that I am using?
2
How does a closed loop control system actually work?
4
How do I compute/plot the open loop transfer function of a system given its state-space description?
1
Control system for a temperature controller
0
Identification of control system type? Open loop or close loop,
1
How to reduce oscillations (rapid changes of control signal) when controlling a real system, which occur due to noise in measurement from sensors?
2
Why does accuracy of temperature PID controller drop over time and how to eliminate it?
2
Is it possible to solely use a P-controller for velocity control?
0
How does feedback implementation look like in a real word closed- loop process?