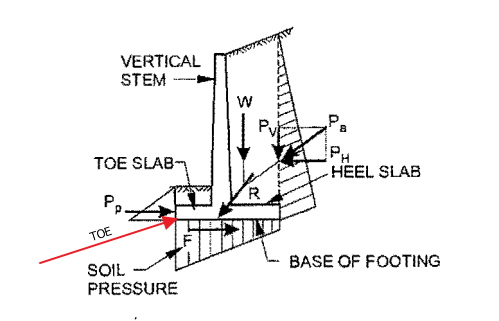 I have designed plenty of (probably several dozen) retaining walls with long toes in situations with low allowable bearing capacities. Usually designed with RetainPro (which is not FEA), but also using "by hand" calcs as well. So your results are not unusual.

With regards to rotation about the toe or heel: overturning and rotation are two different things. You actually want the wall to rotate about the heel just a bit so you can transition from at-rest to active soil conditions, and relieve the locked-in horizontal soil load (from compaction behind the wall).

However, if the wall is going to catastrophically fail, which is what an OTM check is looking at, it WILL rotate about the toe eventually. At the point in time it fails, such a wall will probably have initially rotated around the heel, but the overturning failure will be about the toe. Given the presence of the soil underneath constraining movement into the soil mass, how could it not? But the walls you are analyzing don't seem to be in danger of catastrophically failing (or your FEA would not converge).

Think of it this way: in order for the wall to fail due to the applied overturning moment about the heel, the footing toe would have to rotate INTO the soil. This cannot happen unless there is a slope failure, but that is a separate discussion topic. And that failure mode is not being analyzed in your FEM- that is, unless it's a geotechnical analysis package and you have some kind of decent soil modeling design parameters, which nobody ever has.

Try this experiment in your FEM: put an X fixity at the footing toe (so it cannot slide). Then incrementally ramp up the horizontal load only (no corresponding increase in vertical load). The structure will eventually rotate about the toe. Checking this kind of load condition- high horizontal loading (usually due to live load surcharge BEHIND the wall heel) with high resistance to sliding- is the purpose of the OTM check. Under such a loading condition, it would make no sense to check the OTM about the heel. The wall simply will not fail that way unless there is a localized bearing capacity failure.