I've recently came across Google's cartboard VR headset, which allows you to use your smartphone as a virtual reality device. The headset basically splits the screen in your left and right eyes, which makes 3D vision possible. This is a well known cognitive mechanism that I won't discuss here.

Now, what bothers me is actually the sensor side of the question.

Let us use the following frame of reference for the rest of this discussion: 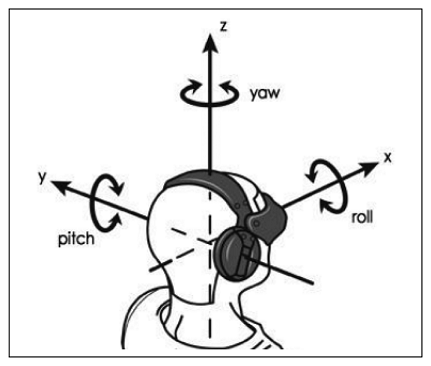 I've been astonished by the precision with which your head's movement is detected.

Sure, the integrated accelerometer (which can detect gravity), can account for rotation around x and y (roll and pitch) since it knows the direction of the ground.

But how do you deal with rotations around z (yaw), which is obviously collinear with the direction of gravity?

However, many people argue that yaw is detected via the gyrometer. Which doesn't seem right to me, for two reasons:

For these reasons, I believe that the magnetometer (i.e. the compass) is the way to go. Even if you turn and shake you phone very aggressively, the virtual reality reference frame doesn't seem to be disturbed. Which lets me think that the device is taking the external world as a reference, rather than relying on it's internal sense of position.

Now, can a magnetometer achieve such a precision of measurement as well? How is the detection of the Earth's magnetic field not disturbed by surrounding sources (I've put a magnet next to my phone, but never managed to mislead the VR program).

Or could the solution lie in a combination of different sensors? (comparing the measurements of the accelerometer, the gyroscope and the magnetometer to cancel most sources of error)

Browse other questions tagged electrical-engineering sensors signal-processing or ask your own question.

12
Does a Faraday cage effectively act as a notch filter?
4
Does The W*nkBand Work?
11
How does a microbolometer (IR camera) work?
2
How does single-phase AC synchronous motor work?
2
How does a carrier signal work from a receiver's perspective?
1
What does “redundancy” mean?
0
How to find the positioning of cutter machine with high accuracy with digital sensor?
2
How to focus the flashlight of a smartphone?
1
How does dynamic braking work with railway locomotives?