How do you prevent ignition of the gas-air mixture before it reaches the burner nozzle?

I believed that the flame propagates over the place where fuel contacts the oxygen. If it contacts a fule+O2 mixture, the mixture inflames as well, and so on and on and on until there is no more inflammable material available around. If there is a gas comes to the surface, the flame stops and starts burning at the gas-air contact zone.

But, as it was explained yesterday, I can have the gas burning in my gas baking chamber because it gets mixed with air prior to getting into the chamber. This explain the mystery of having the flame in a sort of isolated chamber, but, what they refused to explain is that how it is possible that mixture does not blow up in the pipe as soon as you mix gas + air? Why don't you have the flame there, how do you prevent the mixture ignition until after it crosses the designed burner? How does the gas know how the burner/nozzle look like in order to inflame in the right place? My belief was that flame propagates in all directions over the fuel+oxygen mixture, so, it should propagate from the burner down the pipe until the gas-air mixer, right?

BTW, is it right that a hole in a gas pipe sucks the air despite gas in the pipe has pressure > 1 atm (it must be greater than 1 atm in order to be pushed out of the gas pipe instead of sucking the air into it)? How is it possible that gas flows from lower pressuire into the higher pressure area without violation of entropy principle?

I have noticed that there is a similar question on Quora. It is even more infomred than mine assumption -- it asks why no flahback arrestors are installed in the kitchen ovens? There should be absolutely no chance for the flame to go upstream over the explosive mixture! Why?

I keep asking my question because highly appreciated answer there is unsatisfactory. It just says that we use propane cooking cylinders

in our kitchens. These cillinders have much higher pressure than the air oxygen, and, therefore, backpropagation is not possible, says the answer.

However, it prevents the backward propagation of GAS whereas safety issue is propagation of flame. how does it make the flame speed necessarily lower than the gas flow speed, what happens on the last days of cylinder exhaustion when pressure goes down and what about the centralized (natural) gas kitchens?

The speed of the fuel-air mixture depends on the area of the pipe, the pressure and the mass flow. The smaller the pipe, the higher the speed. Once the mixture leaves the pipe it will slow down. Look at the picture of a burning oil well a bit down on the linked page: If you look carefully, you will see a cone shaped area between the end of the pipe and the flame. This is the spray of oild widening after leaving the pipe, slowing down. The flame starts where the speed of flame propagation is the same as the speed of the oil spray. Of course, a pre-mixed flame would have a higher flame propagation speed than a diffusion flame. 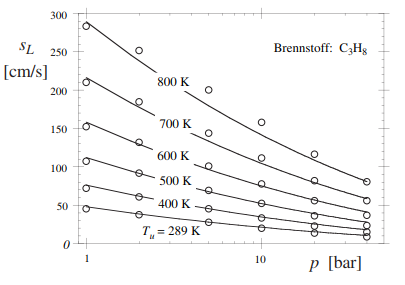 Image source: Vorlesungsskript Technische Verbrennung, N. Peters
The temperature refers to the unburnt part. As you see with higher temperatures the flame propagation is much faster.

Note that when the pressure in the bottle falls, the speed of fuel will fall also and it can become possible for the flame to 'walk' back to the bottle - so you should always have a properly designed system with a flame arrestor and if you have to ask you can't design it yourself.

You also asked how high pressure gas can 'suck' air through a whole. That's the venturi effect, fast flowing fluids have lower pressure. In all gas burners that used this for mixing in air I have seen, the mixing was after the pressure regulator where the gas is close to atmospheric pressure allready.

No fuel (in the conventional sense) will burn without being mixed with oxygen. However it is entirely possible for air to get mixed with fuel in unexpected ways, especially if you have leaks in the system.

Also very relevant is the venturi effect, indeed gas burners without forced air induction rely on this to work. Here the high pressure gas flow is accelerated through a small nozzle whcih casues a pressure drop thus sucking in air through holes in the back of the burner.

Yet another complication is that if you have a flame in a contained space the convection caused by heating can cause upredicatable pressure fluctuations and even further variations in combustion rate can cause rapid ignition of unburned gas reaulting in shockwaves which can propogate back into the gas line potentially sucking in air further compicated by the fact that transsonic shickwves follow entirely differnt rules.

Tyhe short answer is that this is why we have flashback arrestors.

1
How can I turn home gas (LPG) from liquid to gas?
2
How to calculate the velocity of gas in a pipe?
5
How to increase the speed of exhaust gas?
0
Determining gas properties in a steam and air gas mixture
7
Why afterburners are needed instead of burning more fuel inside the turbine?
1
Why is gas pressure specified instead of mass flow?
3
Recovering mechanical energy from natural gas water boiler
1
CFD simulation of an Air and Oxygen gas gradient in a microfluidics device