Stirrups are not shear bearing diagonals but just spacers?

Tension and compression re-bars in a concrete beam are connected by stirrups vertically tied together. If the space in between (this corresponds to web of an I-Beam) carrying shear load predominantly why are stirrups not placed along $\pm 45^0$ principal stress direction for better material economy ?

Such a design practice could be in aerospace engineering for lightweight construction but not found in the originating civil/structural construction practice ? 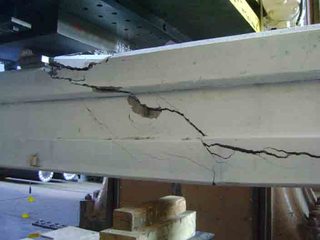 Current concrete shear design takes a strut-and-tie approach. For this we assume a truss made from steel tension ties (reinforcement) and concrete compression struts:

In this image the dashed lines are in compression (which can be carried by the concrete), while the solid lines are in tension (which are carried by the reinforcement). According to Eurocode 2, the inclination of the compression structs is allowed to vary between $21.8^o$ and $45^o$, and depends on the shear present in the beam. This will vary along the length of the beam, resulting in the stirrup spacing changing.

In days of old (not sure how old) stirrups did get installed at the ends of beams in an inclined fashion. I believe CHBDC currently still has clauses for it, but I never see it used for new design. I have used it however in evaluating old designs.

Additionally to inclined stirrups, it was also common practice at one point to bend some of the bottom longitudinal bars up at the end of the beams where moment was decreasing and they were no longer required. However since the shear was increasing some of this bent bar was also used for shear reinforcing.

Not the answer you're looking for? Browse other questions tagged structural-engineering stresses or ask your own question.

9
Why don't we use principal maximum stresses when designing a structural element?

6
How are loads transferred to bearing piles in a wall pier?
4
Got to pour outdoor concrete next week, but forecast is cold. What are my options?
1
What shear strengthening schemes are available for an I beam?
0
What is the good reason if the curves between two results are not similar?
1
Camber Diagram for Steel Girders but not for Concrete Girders
0
Slab Stiffness Modifiers applied in Vertical Elements design but not in Slab design?