Why are LED blinking?

If you carefully look at LED in flashlights, they are blinking at fast rate despite the batteries are DC. It's even more obvious on flashlights with separate R,G,B LED (to allow the control of color) when you move it fast. Why is it so ?

( It's also the case for "power on" indicators in many devices, but here it could just be a low quality DC low voltage from AC 220V. )

The basic problem is that the power source is not matched to produce exactly the right voltage and current that the LED takes to put out the light you want. Some conversion is required between the power source and the LED.

In high volume mass market products, those few extra cents add up. People are used to LEDs flashing, so the manufacturers don't feel much push to prevent the flashing. Put another way, way more people are going to buy on price than whether the light flashes a bit. Most people don't even think of looking at the latter, and it's rarely featured, so it's not a consideration in purchasing.

The extra components not only add a little cost, but also weight and they take space. All around, it's just not worth it when selling to the average consumer.

The reason LED's are blinking is because they use Pulse Width Modulation (PWM) power the LED. Using PWM, the LED are switched on for a specific period of time and switch off rest of the time. The reason as suggested is Efficiency.

There reason that you are notice the blinking is because the duty cycle in your flashlight might be pretty low. Chances are if the LED is switched on around 200Hz, most humans will not notice blinking. To learn more I suggest investigating Persistence of vision and Flicker fusion threshold

Here is an example of a 50% duty cycle PWM signal 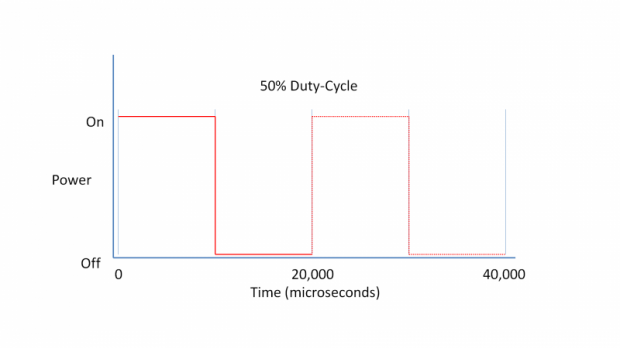 Not the answer you're looking for? Browse other questions tagged electrical-engineering consumer-electronics or ask your own question.

7
What is the best way to control brightness of a LED?

0
Powering LED light using smartphone headset jack
1
Why do microwaves get louder when the timer goes off?
1
Diffuse uniform LED back lighting
1
LED color change in extreme cold
3
Run this LED household lamp in a car?
2
What is the current limiter for SEPIC LED driver?
2
Why do modern consoles require active cooling when old consoles did not?
0
What has changed since the 1990s that made "LED lights" possible?