Which mode does get excited under action of dynamic loading?

The reason this can be done is because superposition applies to vibrating systems, assuming vibrations are small enough. You can split any time varying driving force into a the sum of multiple sinusoids: consider what modes each sinusoid drives, and superpose all the effects together.

For this section, I will only consider 1D vibrating systems governed by the wave equation. There exist cases, such as a transversely vibrating cantilever beam, that are governed by wave-like equations which I won't cover here unless it's of interest. Since the governing equation is the wave equation, the mode shapes will be sinusoidal.

In order to determine what amounts of each mode is being driven it is useful to write the deflected shape, $w(x,t)$, as the sum of each of the modes.

For example, the governing wave equation for a vibrating tense string is given as follows:

(This equation can be adapted to other wave-governed systems by replacing the variables appropriately). 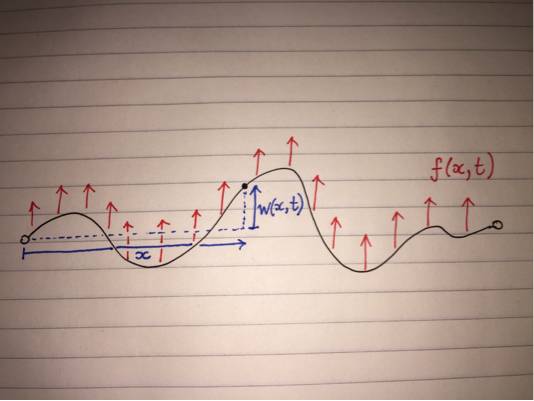 Substituting the sum of modes expression into the wave equation gets:

Where $\omega_i$ is the resonant frequency corresponding to the $i^{th}$ mode. Then, by multiplying by $u_j(x)$ and integrating along the whole domain with respect to $x$, noting that some terms cancel out (the integral of $u_i(x) u_j(x)$ is zero for $i\ne j$ due to orthogonality between different mode shapes), we get the following differential equation:

What this all means is that, given the distributed force-per-unit length on the system, solving the above differential equation will give the amplitude of the $j^{th}$ mode as a function of time, and hence quantify how much that mode is present at any point in time. If the distributed force is sinusoidal, after a while (i.e. at steady state) the modal amplitude will also vary sinusoidally at the same frequency. For example if:

Note how the modal amplitude seems to rocket to infinity if the system is sinusoidally driven at the resonant frequency. This is to be expected for undamped resonance: in reality, damping will prevent such unphysical responses, but this has be omitted from the scope of this answer.

It is possible to modify the modal amplitude differential equation so that the force applied is a point force instead of a distributed force. Therefore, if a point force $F(t)$ is applied at $x=x_0$, then (substituting $f(x,t) = F(t) \delta(x -x_0)$, where $\delta(x)$ is the Dirac delta function):

3
How to simulate the Natural Frequencies of a Planetary Gearbox?
1
What is Experimental and Operational MODAL ANAYLIS?
2
Modal Testing and Frequency Response Interpretation
2
Units for vibration measurements
0
Amplitude RMS vs Amplitude in understanding vibration
1
Vibration damping a bed from mechanical vibrations
5
In vibration study, should the reference be necessarily the mean/equilibrium position?
1
How do I get the modes shapes (that I got from FEA of a system) in reality?