What type is miter joint - Welding

Is miter joint in welding - butt joint or corner joint ?

My opinion is that horizontal welds are butt welds and vertical corner welds (fillet) - Just my opinion. I am not sure about it, that is why I seek guidance. See image:

How will these welds be designated and shown on a technical drawing ?

Assuming you're talking about plates: it would depend on you code, but usually it's the angle between the two joints that matters. If you mean a 90 degree joint with two 45 degree miter angles, I would still treat it as a corner joint. If there is a 10 degree miter angle on each piece so the dihedral angle in the joint is 160 degrees, it would be considered a butt joint.

In AWS D1.1 for example, the notes of table 3.3 specify that and dihedral angle from 135-180 is a butt joint and any dihedral angle from 45 to 135 can be considered a corner joint. In the 2008 version of the code it's note j - I don't have another year handy to cross reference. Note that in some scenarios you may need to account for a Z loss factor on the acute side.

If you are talking about tubes, this is significantly more complicated and we'll need more details, especially what type of tube and what code you are working to.

In reference to your edit that this is a tubular mitered L connection : I believe the proper thing would be to specify a PJP weld around the two flat sides and the outside corner and a fillet on the inside corner. For the purposes of weld qualification, the two flat PJPs would be considered butt welds and the outside corner would be considered a corner weld. This might mean that you want to provide different bevel types at each side. It is also acceptable to specify a PJP weld on the three sides and allow the contractor to chose the bevel type that is best for them as long as they obtain the effective throat you list (or the code minimum)

The following is from the FAQ at the steel tube institute.

In direct answer to your question, edge preparation (beveling) of the HSS would be required along 3 of the 4 edges of the miter joint, in order to successfully accomplish PJP welds along those 3 edges. The capacity of such welds is limited, and the welds themselves (to matched box sections) need to be made very carefully. For such miter joints, especially if there is reasonable applied loading on the HSS members, it is recommended that the two HSS each be separately welded (usually by fillet welds) to a 45o stiffening plate. This type of “knee connection” is shown and discussed on pages 67 to 69 of CIDECT Design Guide No. 3 – “Design Guide for Rectangular Hollow Section (RHS) Joints under Predominantly Static Loading”, 2nd. edition, 2009.

I'm not familiar with euronorms, but I imagine they would be similar since the underlying principles are the same.

I would agree with your assumption on the weld types. That being said, you could probably just specify a V-groove weld all the way around the joint like this(where xx is the size of the weld) If necessary, you can provide as many details as you need into the callout: 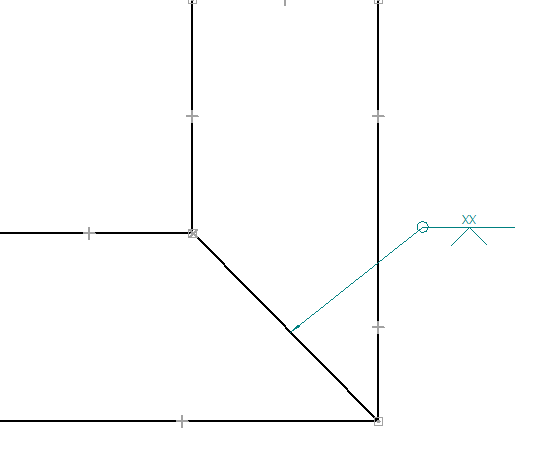 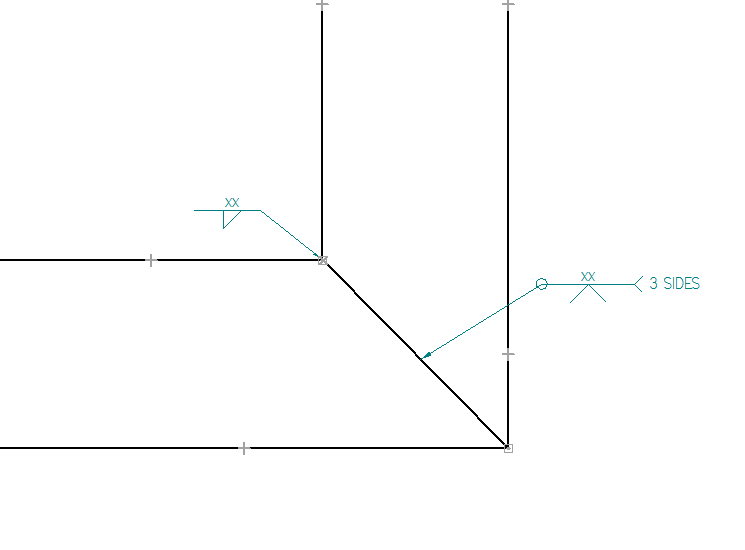 Lastly, you could just use 4 separate weld callouts for each of the 4 sides.

For all practical purposes you have two butt welds, a fillet weld and an outside corner weld.

Often for general fabrication these will be treated as separate welds. Indeed if the work is assembled in a jig they may not all be accessible at the same time.

In this sort of situation weld order is very important as this type of mitre joint is very prone to distortion and SHS isn't the most dimensionally precise of materials. In particular they may be supplied in lengths which are not as straight as you would ideally like.

So in terms of design you properly don't need to worry too much about specifying the welds beyond the general standard/code you want to apply...more important to the fabricator is the geometric tolerances for the joint ie what are the important dimensions.

Note also that for this size of square tube getting accurate mitre cuts is not trivial so specification of acceptable root gaps in respect to overall dimensions is very relevant.

Clearly in most applications some dimensions matter more than others so it's important to be clear what your priorities are in your tolerances.

Equally if you are not conversant with welding codes just TELL your supplier what you want to achieve in plain language.

Not the answer you're looking for? Browse other questions tagged mechanical-engineering welding welds joining or ask your own question.

4
What does the abbreviation “B.C.” mean on a weld joint diagram?
1
How does Electric arc welding compared to gas welding?
2
Types of welding (Shaft)
3
Overcoming limitations of a snap in joint
0
Stick welding inner corner
1
Laser beam welding
2
What treatment is necessary after welding carbon steel pipes?