Whats the difference between leading edge and slat?

According to this figure whats the difference between leading edge flap and slat and why the slat come with plain wing and TE flap come alone? thanks. 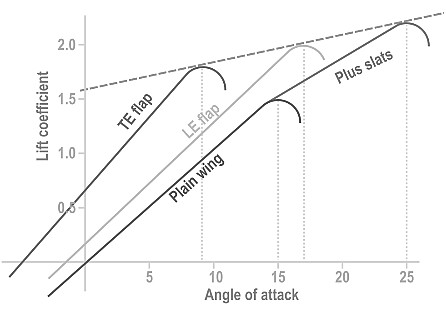 This comes down to the fact that flaps are fundamentally changing the geometry of the wing so with flaps deployed the wing is a different shape with correspondingly different characteristics. So when a flap is deployed it is essentially a modification of the main wing.

On the other hand the primary role of slats (distinct form LE flaps) is to control the airflow over the wing, specifically to delay flow separation, and as such don't directly contribute lift themselves but allow the main wing to operate at a higher angle of attack before it stalls.

Some aerofoils also have slots which allow airflow between low and high pressure sides of the wing with the intention of either reducing drag or keeping the airflow attached or both. It's not uncommon to see flaps with slot gaps between the training edged of the main wing and the leading edge of the flap itself.

Not the answer you're looking for? Browse other questions tagged aerospace-engineering aerodynamics or ask your own question.

5
What is "Bernoulli-Lift", and why does it only account for 20% of an airplane's lift?
2
Difference between seat belts
0
Advice for designing internal structure of glider wing
3
How to Find Drag Force from Skin Friction
1
Why does the upper wing skin fail in buckling and lower wing skin does not?
2
Difference between pressure suits and anti-g suits