If I have a small gear that I am turning a large gear with, from what I know that gives me the ability to move heavier things. Like a winch of sorts. Why does turning that little gear allow that mechanical advantage. I saw a video that said gears were really lots of levers. I can’t visualize the lever.

In a car, for example, why is first gear more powerful that fifth for initial movement? I don't know how to visualize it. In order for me to lift a car with a lever, I need a fulcrum close to the car and an effort arm fairly long (I guess). So where's the fulcrum and effort arm in the gear moving the car here?

Is my question worded correctly for what I ask in the body?

edit: Am I correct that gears in a car transmission are mostly for ratio aspect of things? if I look at two gears together, I can see the ratio and one turning twice as much as another. But what is missing is the longer arm that eased the effort. Is that "effort arm" replaced with a strong source of power (an engine) to make up for the missing long effort arm?

edit: This is the video I saw that made me think about it, https://youtu.be/odpsm3ybPsA?t=3m5s I started it at the point I'm asking about. It's pretty quick for the part I'm talking about, maybe 2 minutes. You see that guy turning the crank to move that little gear? See the long crank, the "effort arm"? That looks like a lever to me.

Then I saw images somewhere, that had similar ideas and it was showing the crank, like on a well crank, being the "circle" or wheel moving the axle which turns the small gear.

In a car though you don't have that big wheel to turn first. You have the small drive shaft. Is there a bigger wheel or gear I am missing? One that is rotating before the first small gear that turns the big one? edit: Is this the flywheel?

The work-energy principle says that the change in energy in a system is equal to the work done to the system. Conservation of energy means that the sum of inputs must equal the sum of outputs.

So, if the sum of inputs and sum of outputs have to be equal and there's no friction, then:

So, let's talk about the lever first. Assuming both ends of the lever are rigid, motion of certain distance on the input requires motion of a certain distance on the output. How far the output moves for a particular input motion is determined by the location of the fulcrum. FYI, the study of how physical constraints determine input and output motions is called "kinematics."

So, if the input and output distances are fixed by physical constraints, and the input force is a given (you supply a force of $X$), then the only thing in the equation that can change to "balance" the input work and the output work is the output force.

Hopefully this all makes sense so far.

Define the arc length, or distance actually traveled by the input or output end of the lever to be $s$. The input moves:

If you divide the output by the input, you can see that:

The thetas cancel, and you're left with:

which can be restated as:

The output distance traveled is equal to the input distance times the ratio of lever arm lengths. You can plug this back into the work equation:

Now, considering this, where a lever can't flip "around-the-world" because it would hit the ground or fall off the fulcrum, a pulley or gear can rotate continuously.

Where before, for the lever, the amount of output motion was dependent on the lengths of the lever arms, here the "levers" are actually gears, and their "lengths" are their radii.

The only difference here is the change from lengths to radii. The total angular distance traversed, $s$, still keeps the same form.

So now, revisiting the work equation:

But, from the definition of arc length:

so, you could substitute:

You can view or group this two ways - the first is as I did the substitutions here:

but, you could also group that to read:

What is a force times a lever arm? A torque. So you can rewrite the equation as:

This is the analogy between linear systems and rotational systems - a force is akin to a torque, and a distance is akin to an angular span. Important to note here that $\theta$ isn't the particular angle the system is currently at, it's the angle through which the system traversed. That is, $\theta = \theta_2 - \theta_1$.

Anyways, hopefully the explanation of how the linear (lever) and rotational (pulley or gear) frames are related makes sense.

I think, more to your question, the "force multiplier" effect that you get with a lever arm, or gear, etc. is a tradeoff between applied force and applied distance.

I drew a picture that hopefully illustrates the relationship between gears and levers. A lever has a fulcrum, which provides reaction forces, and a length on either side of the fulcrum.

A gear (pulley, etc.) is like a lever with equal lengths on either side of the fulcrum that is lashed/tied/bound to another lever. 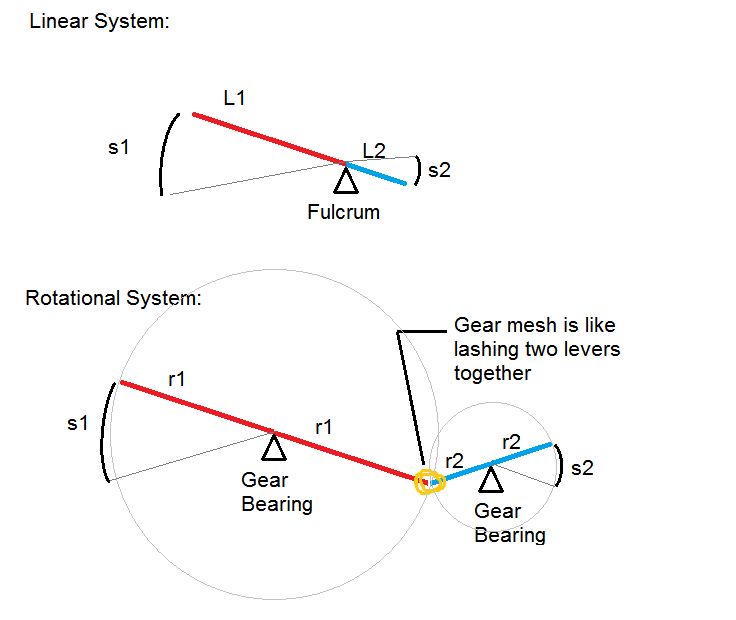 The lashing that "ties" the two levers together is referred to as the gear mesh. Two teeth come into contact with one another, and that physical contact causes one "lever" (gear) to push the other.

I'll add a little more information, in the hopes that more detail will help cement the analogy rather than confuse you. Just like the example I've mentioned - two levers lashed together, if you lash them together too tightly then they're not actually able to move at all. The same can happen with a gear mesh - if the gears are too close together, the mesh is too tight and the assembly won't spin.

Conversely, if the lashing that binds the levers is too loose, then when you change direction there will be some dead band where the lashing is sagging. The input is able to rotate freely before the lashing snaps taught again, at which point the output starts to move. Again, the same thing happens in real gear systems - if the gears are too far apart, or the teeth are too narrow, then there is a void between one pair of teeth and the next. This is referred to as backlash.

Again, this might be too much information, but my hope is that you can understand that two gears are like two levers that have been tied together. If the binding (backlash) is too tight then the gears can't move, but if it's too lose then the output tends to get jerked around a lot as the "lashing" goes through the slack-taught-jerk-slack cycle, like a series of flicks instead of a continuous push.

Consider a lever, one side of the rod is longer and one shorter. When you rotate the thing around he fulcrum then your lever ends move a different amount. We can thus say that you concentrate the effort of a big movement to a smaller one this is mechanical advantage. We could formulate this as follows:

From which follows that

We can also formulate this as the length of paths taken but since length of a circular arc is $2\pi r$ they cancel out since the same factor is in both radius terms. Now you can essentially think of 2 gears as circles that can not slip in relation to each other therefore the smaller rotates faster and produces more force than the larger one the formula is the same as above. So if you put a force in on a side that has double the radius you get that the force the other end is doubled.

Since gears must mesh relative to the radius, circumference and diameter we can just count the number of teeth per revolution instead of radiuses as it produces same thing. So replace $r$ with $z$ if you wish.

8
How can I get a stepper motor to engage with a freely spinning wheel?
4
Designing non-self-locking worm gear
4
Why do single speed RC cars use a gearbox?
3
Can a hobby gearbox be used to mechanically amplify small forces for better force sensor resolution?
3
What is this V-shaped strut on the landing gear for?
1
Is there a way to auto-reverse cassette tape with gears only?
0
Friction losses between spur gears: less teeth are better than many teeth?
5
Mechanical mechanism that regulates gear's rotational velocity