PID position control when setpoint does not require continuous force

I'm struggling with the practical application of a PID control algorithm when the set point does not require any external force to stay in position.

For example, I have a geared electric motor that has a mass attached perpendicular to the motor's shaft. The mass is fixed to the shaft so it will rotate with the shaft without slipping. There is a sensor on the mass that knows its angle relative to horizontal (an accelerometer in my case), which is used for error feedback. The control system attempts to drive the motor such that the mass is always balanced vertically above the shaft, as pictured below. The motor itself is attached to a robotic arm that may rotate around arbitrarily, so the motor will work to keep the mass vertical at all times. 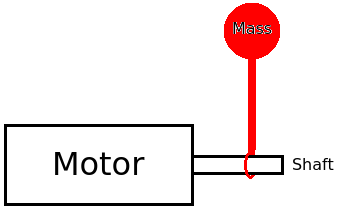 The key thing to note here is that once the motor has achieved the set point (the mass is vertical above the shaft), it does not require any more work from the motor. No additional force is required to hold it there. In fact, there's enough back-drive friction in the gearing that even if the mass is, say, 10 degrees from vertical, it'll still stay put.

My question is in regards to correctly implementing a PID control loop for this kind of system. Here's the situation that has me confused:

Let's say the mass has come to rest deflected 5 degrees from vertical. In the PID loop, the P component is very small because the error is very small. So the integrator winds up to do most of the work of removing this steady-state error. It does its job and adds just enough power into the motor to drive the mass to the vertical position. Once the vertical position is achieved, no additional force is required to hold it there. But that integrator component still has a non-zero value and will keep driving the motor, making it push the mass passed the set point and to the other side. An inevitable oscillation about the set point will then occur.

Are there special considerations in a PID algorithm for this case? Or am I just fundamentally misunderstanding how a standard PID algorithm will react to the system I described above?

EDIT:
My original question was misusing the word "stable". Thank you to Carl Witthoft for pointing that out. The focus of my question, however, is how to properly implement a PID loop when the system requires that the control forces drop to zero as the position error approaches zero.

You are correct about the effect of the Proportional and Integral terms in your controller, but don't forget the Derivative part! While the Integral term tends to add energy to a system, the Derivative term subtracts energy by trying to slow down the rate of change of error. It acts like friction or damping in the system. Derivative terms are usually necessary for systems which don't have much physical damping, otherwise they would oscillate a lot before coming to a stop. This is why generally speaking you will see PD and PID controllers, but rarely just P and never (to my knowledge) I control.

How do you fix your problem? Well you have two options.

The first option is to increase the derivative gain. This will reduce oscillations but it will also slow the response of your system.

The second option is to limit the integral windup. This will prevent the integral term from getting too large, meaning your torque will stop increasing after a certain point. This way you can use a smaller derivative gain since the integral term will not get so large. I would start with a saturation function that causes $K_I \int e(t)dt \leq m g l$ (where $K_I$ is the integral gain, $e$ is the error, $m$ is the mass, $g$ is acceleration due to gravity, and $l$ is the length of the arm on which the mass is attached). This is a worst-case estimate of how large your integral term would have to be. Start from there and try decreasing it until you get the performance you want.

You will probably need to use a combination of option one and two to achieve the best performance.

You are confusing the definition of "stable," I suspect. Yes, the weight will remain vertical in the absence of applied forces, but no, that is not the stability you're looking for (with apologies to Obi-Wan). This is known as an "unstable equilibrium" because any force, or if you want to get fancy, quantum fluctuations as described by the Heisenberg Uncertainty Principle(1) , will cause the system to leave equilibrium.
By comparison, if the weight is hanging vertically below the rod, that's a "stable equilibrium" because any minor displacement will be counteracted by gravitational force, returning the system to the equilibrium point.

So, yes, you'll need some sort of controller to keep the weight pointing up.

[1] Yes, Heisenberg is silly in this context but there are plenty of physics students who are given macro problems like this just to demonstrate the magnitude of the effect.

How did the mass come to rest with the PID controller enabled?

"Once the vertical position is achieved, no additional force is required to hold it there."

The mass must have moved into position. Having mass and a speed (with which it attained the correct position) means that it has inertia. The inertia then requires that either a force is applied to remove the speed or that the mass must pass vertical.

"An inevitable oscillation about the set point will then occur."

To be more blunt than CarlWitthoft, could you put the mass in position with such precision that it would stay there forever? The answer is no, for the reason he mentioned: such a position is inherently unstable. Given enough time, it will fall over.

"Am I just fundamentally misunderstanding how a standard PID algorithm will react to the system I described above?"

I don't think you're misunderstanding the PID controller, I think you're beginning to see some of the drawbacks of PID control. The same integral error that prevents "droop" if you were trying to control the reference position to be 90 degrees (parallel to ground) causes you to overshoot when you try to control the load to be vertical.

It's possible to overcome the shortcoming in this (relatively simple) case by adding a "feed-forward" term. That is, you could calculate the anticipated load torque, based on load angle, mass, and the length of the arm to which the mass is attached.

The load torque you are calculating is the static torque required to hold the load in a position. It does not provide any torque to move the load to a new position, or any control to maintain the position, if you had any modelling errors (error measuring mass, effective moment arm, etc.).

By "seeding" the motor with the rough current (torque) it needs to maintain the load at any angle, the PID controller could then be tuned to a set of "universal" gains that should then behave the same at any angle.

PID control is most effective when the underlying system isn't changing. When the system changes (the required torques change, for example), then either the control gains need to change or the performance degrades.

You can use a compensatory controller (feed-forward control, for example) to "normalize" the underlying system, promoting a more versatile "robust" PID controller.

For the record, I hate the word robust.

Not the answer you're looking for? Browse other questions tagged control-theory pid-control or ask your own question.

0
How to choose reference signal in a state space model?
2
How does a closed loop control system actually work?
1
Do variables dimensions matter in PID simulation + I want the PID output to be volts?
3
Controlling temperature using PIDs on two separate controllers
0
Using Integral gain for motor positioning
0
PID Control: Is adding a delay before the next loop a good idea?