How to determine signal strength verses distance for LTE base stations?

All mobile phones have bars or some other type of indicator displaying signal strength. As mobile devices move away from the base station the signal strength becomes weak and at some point becomes out of range or establishes connections with a different tower.

Question: For a LTE base station is it possible to determine the relationship between the signal strength and distance?

Assumption: LTE base station is located in a plain field.

Back story: A cellular service provider is planning on installing a LTE base station using equipment from JMA wireless. The model number of the equipment is X7CQAP_FRO_645. Below is a H-plane pattern plot for 750MHz frequency. 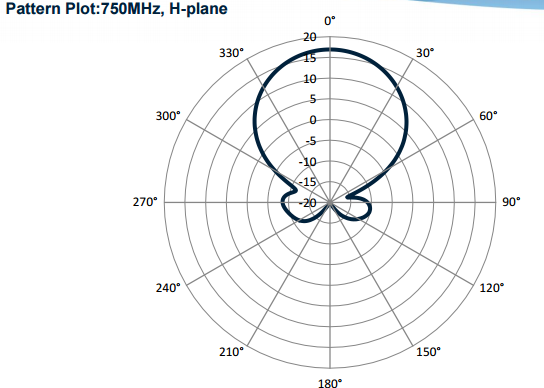 Can anyone provide insight as how to interpret the above plot in relation to signal strength verses distance? Do I need more information?

For a LTE base station is it possible to determine the relationship between the signal strength and distance?

Ideally yes. Practically, probably not very reliably. Given the following pieces of information and assumptions, you can find the distance between any transmitter and receiver:

These are the terms needed in the Friis Transmission equation to solve for Distance.

The plot you show is likely a gain plot along the horizontal plane in dB relative to an isotropic antenna (equal power in every direction). Every 3 dB represents a doubling of gain (and hence energy) transmitted in that direction.

Additionally, you can find a 'rough' measure of your phones received power by entering field test mode (google for instructions). The rest of the information is going to be tough to come by.

3
How to measure transmit power level from LTE base station?

8
Why does the LTE Specification define SC-FDMA as the modulation scheme for the reverse link?
3
How to measure transmit power level from LTE base station?
2
How can one determine the LTE base station providing service to a mobile device?
1
What are alternative to installing LTE / Cell Tower to address capacity issue?
4
Minimum base current for transistor amplifier