[EDIT August 7 2016 7:00 P.M. Frank There are two types of balanced photodetectors. Free space and Fiber, which is faster and smaller. The ThorLabs PBD430A Fiber model takes the difference between two signals , subtracting them across the spectrum for visible or infrared light . The PDB430A has two different frequency ranges 0 Hz to 400 MHz and 30Khz to 350 Mhz. ThorLabs told me last Friday that their PDB430A has a switching speed fast enought to respond to laser pointer strikes within 50 millisecond , thereby protecting the pilots from permanent damage.]

This paper is very important because we wish to protect pilot's vision from increasingly sophisticated laser pointers on the ground 150 meters away aimed at the Boeing 747-787 cockpit windows. If we can detect the presence and wavelength of a coherent laser light in an incoherent background within 10 milliseconds of arrival , could I then activate a tunable band-reject filter based on this paper centered at the visible red, green or blue wavelengths?

In addition, I read with great interest in this paper that:

"The frequency omega2 can be tuned by the MZI without changing the filter shape according to Eq. (9). Another slicing way is to directly use the FPOP to shape the spectrum of the BOS. In this way, the interferometer is not needed in the approach, but a FPOP with high resolution is required."

Furthermore , I read with great interest in the paper that:

"In this paper, two filters are necessary. One filter is used to filter the BOS; the other one is used to split the single laser from the BOS. In order to quickly verify the principle, we use two waveshapers in the experiment. It results in a high system cost. Moreover, a way to reduce the cost is to use fiber Bragg gratings (FBG) with optical circulators to work as the filters. Take the second filter as an example, we can send the light into the FBG via an optical circulator. When the Bragg wavelength is just equal to the laser wavelength, the reflected light only includes the laser light and the transmitted light only contains the BOS part."

How could I estimate the performance loss associated with replacing the waveshaper with fiber Bragg gratings and optical circulator?

This paper is a very nice example of out-of-the box engineering because it has no moving elements or electro-optic Pockels or Kerr effect. Rather, the authors subtract a single frequency source from an allpass optical filter producing a band-reject filter.

The schematic diagram of the proposed microwave photonic filter (MPF) is illustrated in the above figure. The single-side-band modulator is a fancy name for a microwave frequency mixer. The optical power and optical angle frequency of the laser source is 𝑃 𝑜 and 𝜔 𝑜 , respectively. The spectrum-sliced broadband optical source (BOS) is first confined within the optical angle frequency range between 𝜔 1 and 𝜔 2 (𝜔 1 <𝜔 2 ) via the Fourier domain optical processor (FDOP), and then sliced via a Mache-Zehnder interferometer (MZI) which is constructed by two 50/50 optical couplers and a variable delay line (VDL). The FDOP works as a programmable optical filter. The single-frequency light and the broadband light are coupled together and then single-side-band modulated to carry the radio frequency (RF) signal. The modulated light is fed into a dispersion fiber, and then launched into a wavelength division multiplexer (WDM). The WDM splits the light into two parts: Port B only includes the laser part; Port C only includes the BOS part. A balanced photodetector (BPD) is employed to detect the two parts, respectively.

Please correct me if I have stated anything incorrect. The use of equations is appreciated.

Any help is greatly appreciated. 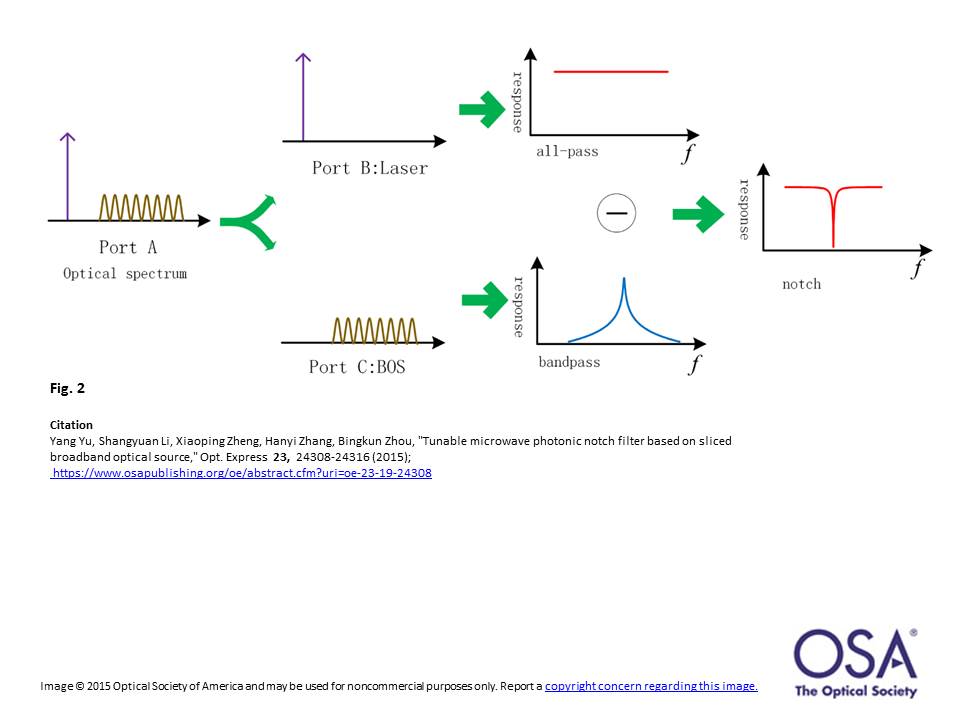 I discovered this morning that one can adapt the Tsinghua University professor's novel design and analysis microwave photonic notch filter to a visible light photonic notch filter by applying the excellent Princeton University paper titled "High frequency modulation capabilities and quasi single-sideband emission from a quantum cascade laser" with URL [https://www.osapublishing.org/oe/fulltext.cfm?uri=oe-22-19-23439&id=301440]. Here is an excerpt from that 2014 Princeton University Department of Electrical Engineering paper;

Both intensity- (IM) and frequency-modulation (FM) behavior of a directly modulated quantum cascade laser (QCL) are measured from 300 Hz to 1.7 GHz. Quantitative measurements of tuning coefficients has been performed and the transition from thermal- to electronic-tuning is clearly observed. A very specific FM behavior of QCLs has been identified which allows for optical quasi single sideband (SSB) modulation through current injection and has not been observed in directly modulated semiconductor lasers before. This predestines QCLs in applications where SSB is required, such as telecommunication or high speed spectroscopy. The experimental procedure and theoretical modeling for data extraction is discussed.

Since the first demonstration of the single-mode, room temperature and continuous wave operating quantum cascade laser (QCL) less than a decade ago [1], a number of applications were triggered that use their advantages as monolithic mid-infrared (mid-IR) semiconductor lasers. One of the most significant applications is the spectroscopic molecular sensing, which can be several orders of magnitude more sensitive than in the near infrared. These monolithic, tunable mid-IR lasers allow development of both compact and highly sensitive trace-gas detection systems. Tunable laser spectroscopy with semiconductor laser sources inherently relies on the wavelength tuning capability through variation of laser injection current. However, since this process is not arbitrarily fast this imposes some limitations on the applications.

There were only a few reports in the literature on the experimental results of the (small-signal) modulation response of directly modulated QCLs. Examples include [2] (intensity modulation, IM) [3], (frequency modulation (FM) up to 100 kHz), and [4] (only THz QCLs). Significantly more extensive are reports on the FM response in diode lasers [5,6].

Main differences between QCLs and conventional interband DFB diode lasers (e.g., those operating at telecom wavelengths) are expected from the thermal implications of significantly thicker active regions and the fundamentally different carrier dynamics in QCLs. The latter is due to the ultrashort intersubband carrier lifetimes, according to which QCLs can have relaxation frequencies in the 100 GHz range. This has been shown theoretically by Shore et al. [7,8]. Hence, it is very interesting to have experimental studies in the high frequency regime. Furthermore, the electronic tuning (at f >>10MHz) could be quantified.

In this paper the FM to IM ratio for a CW-DFB-QCL emitting at ~9 µm is presented for a wide range of modulation frequencies up to 1.7 GHz. The variation of the FM-IM ratio with bias current and its influence on the optical spectrum of the laser radiation is analyzed.

The tuning of optical frequency of a semiconductor laser through injection current is mainly caused by two physical effects [9,6]: firstly the Joule heating of the active region results in thermally induced changes of the refractive index, which causes frequency tuning of the emitted laser radiation, and secondly the refractive index variation from the electro-optic light-carrier interaction also affects the laser output frequency. Since heat conduction is an inert process, the low frequency behavior is mostly dominated by thermal tuning, whereas the electronic tuning is governed by the carrier dynamics and for diode lasers dominates in the MHz and GHz range.

Please let me know if I have made any mistakes.

Not the answer you're looking for? Browse other questions tagged materials optics lasers photonics or ask your own question.

0
Is it possible to make a tunable coherent light filter with 1.8 nanometer bandwidth for visible light?
2
What happens when very bright coherent light and weaker incoherent background light passes through doubly cascaded diffraction gratings?
0
How is an digital coherent receiver able to achieve 100 Mhz line-scan rate for detecting coherent light in the presence of incoherent light?
2
What are the design principles for risers in sand casting?
2
What is the highest repetition rate achieved for pulsed Terawatt and Petawatt-order lasers?
1
How is light guided by a perfect mirror waveguide for angles not exactly at the guided mode angles?