Can masoned ceilings be flat?

In historical or modern buildings, flat ceilings are typically made of concrete, wood, metal, solid bedrock (for carved tunnels), or generally a material that can withstand pushing forces (pressure) and pulling forces (tension).

A ceiling made from bricks / masonry would typically be vault-shaped, because otherwise it would crash. This is what we find in a lot of historic buildings.

I can so far only remember flat brick ceilings from imaginary buildings e.g. in a roleplaying context or in video games. But I wonder if there are cases where such a thing can be realistic.

In theory, I can imagine two ways to achieve a flat ceiling with masonry:

What you're looking for is called a "jack arch".

The top and bottom are flat, but the joints are angled in such a way that the the parabolic "path of compression" is entirely contained within the layer of masonry.

The loading (e.g., the outward force at the ends) is higher than with a thinner parabolic arch or vault, simply because the extra material is additional dead load.

I had a project around 1976 in the middle east with similar situation. Because of a sudden shortage of cement and re-bars we had to modify the plans for a few thousand homes in several villages that were totally destroyed by an earthquake.

We talked with local masons and people in the industry and modified the plans to take advantage of locally available building materials. Which were burned clay brick and their traditional mortar which was a mixture of gypsum and lime and clay mud mixed with straw.

We adopted the ceilings to two typical modules, rectangular of 10x 16 feet and squares of 20x20.

In both cases we used arches of very shallow rise to width like 3% for the rectangular and 5% for squares, both of them supported buy concrete beams on brick walls. Because of the concern about the future quakes the buildings were re-enforced with concrete vertical tie columns connecting roofs and ceilings to the foundation.

The square ceiling were covered by a pattern of four triangle gently raising up and meeting at a key brick at the center of the room like a big X. The ceilings were surfaced to a level finish by light weight gypsum plaster.

we had to ask the old mason masters to train the young ones the skill and art of laying the bricks without shoring by slapping the new row into a slanted bed of mud covering the last row of brick while making sure there was solid brick to brick connection on each row!

Many quakes, some in the order of 7.8 Richter, have shaken that same area. As much as I know no significant damage has happened.

Below you can see two sketches. One is looking up perspective view of the shallow vault ceiling, the other one front view of shallow barrel ceiling. The trick of laying the bricks without forms is too mix the mortar with just the right proportion so it dries with enough strength to hold the dead weight and at the same time give the mason time to work on the bricks. The vault proved to be exceptionally strong and easy to build. The bricks were approx. 2x4x8 inches burned into 400 psi compression strength. 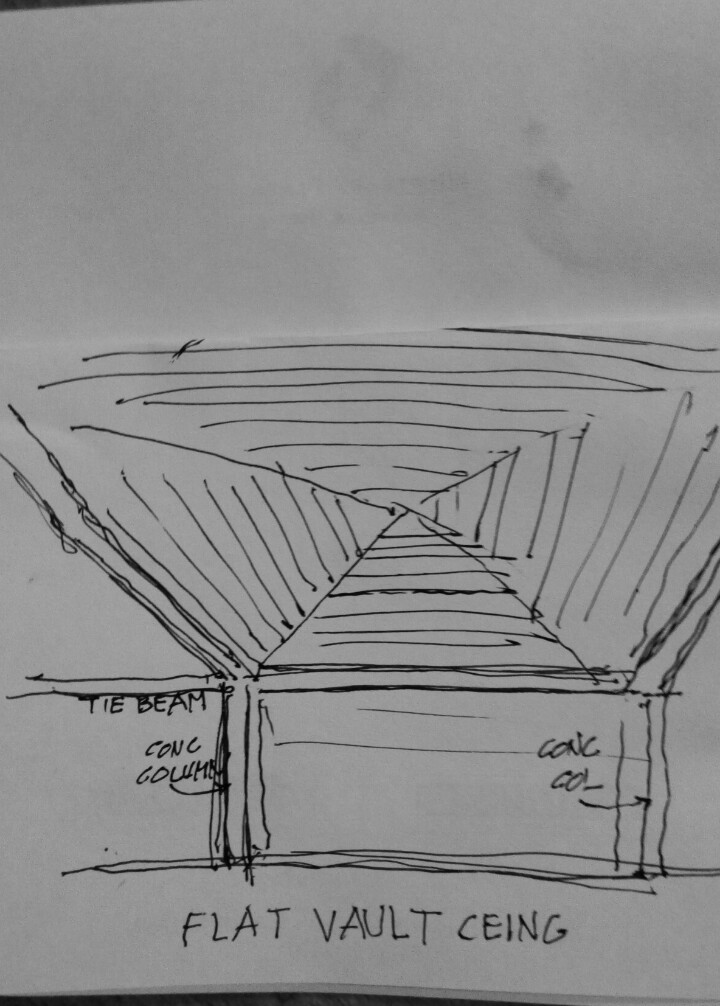 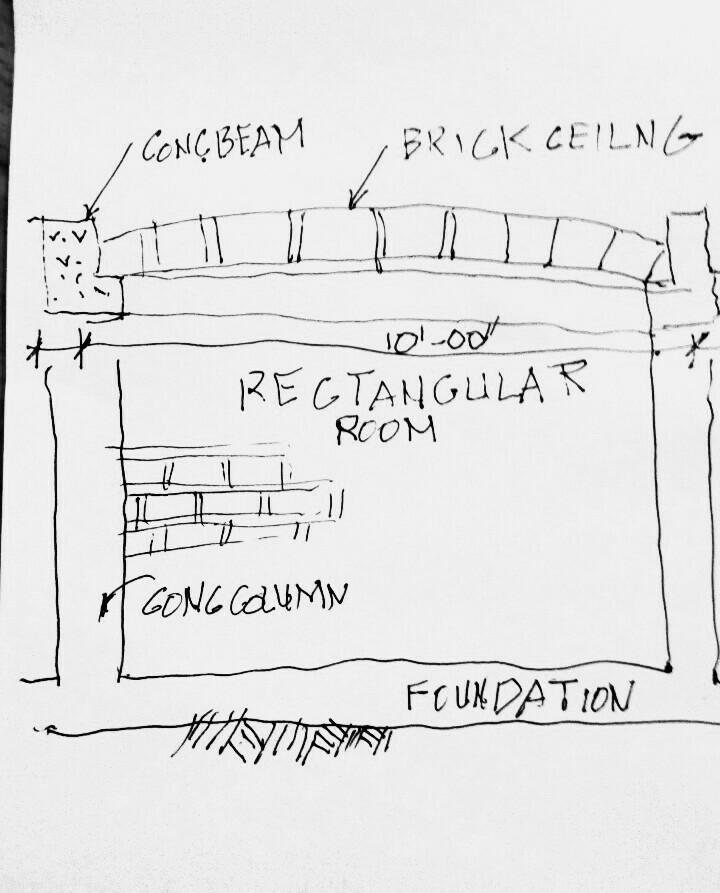 Not sure if this counts, but the proprietary Halfen concealed lintel system* achieves flat brick ceilings. It may not count because the masonry is only decorative, not structural - it actually uses steel for the structural support.

*Other proprietary systems are probably available from other manufacturers. I'm not sure there's a recognised name for this technique, possibly "concealed lintel" might suffice.

The problem with creating true flat-masonry ceilings is that masonry is very poor in tension - the brick-mortar joints take compressive load but have little to no tension capacity. With a flat ceiling the bottom face of the ceiling will be in tension due to bending stresses.

Theoretically some sort of mortar/epoxy/glue which has tension capacity, and also achieves a tension bond to bricks could work.

Not the answer you're looking for? Browse other questions tagged civil-engineering masonry or ask your own question.

7
How can we prevent/detect hydrogen embrittlement?
3
How high can you stack mobile homes?
0
How can I prove the location of centre of gravity of centroid?
4
How can the bearing capacity of an existing tarmac road be determined?
1
How much weight can this stand hold?
0
Can we have plinth beam below ground level for small homes?
0
Can I use grout as mortar?
3
Why is the thread of the screw linear? Can it be wavy?