What does "beam end release" actually mean, and how it is modeled in mathematical terms?

I am reading a document about beam end release here:

An end release will allow either or both ends of a beam element to rotate about or translate along one or more of the local axes of the beam.

And the article continues with the following diagram:

(b) The theoretical rotation or slope of the beams. Note how the result is discontinuous at the hinge points.

The understanding I get from the above is that if we release at a beam end, then it will become hinge ( and hence the rotation at the end is not continuous)-- and that's it. Is it true?

If this is true, then I don't understand the moment released term in RISA software:

Mathematically, a release is achieved by giving a stiffness of zero.

A release in rotation is the same as a release in moment: the only way to ensure rotation continuity from one member to another is to transfer moment between them. Hence a moment end release is a stiffness of zero against rotation about the relevant axis.

Technically, you can release a beam end in any degree of freedom (hence the final option from RISA). In practice, the vast majority of beam end releases used are moment releases, hence your first source has conflated the two.

Any continuous element of a beam, for small deflections, is governed by the following differential equation:

Where $E(x)$ is the Young's Modulus of the beam, $I(x)$ is the Second Moment of Area about the axis of bending for the beam's cross section, $u(x)$ is the upward displacement of the beam, and $q(x)$ is the downward force per unit length acting on the beam. $x$ is a coordinate such that, for a beam of length $L$, $x=0$ at one end, and $x=L$ at the other end.

This equation is a forth order differential equation, and so it requires four boundary equations. This is done by applying two constraints at each end. There are three different types of beam end, each with different constraints to be applied: 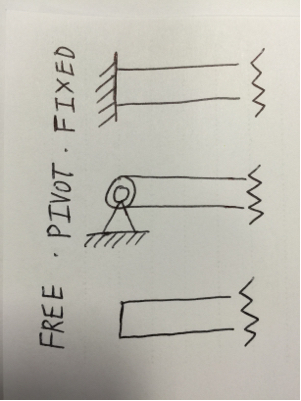 This is where the end of the beam is rigidly clamped to e.g. a wall. This end allows both shear forces and bending moments to be transmitted from the beam to the wall. The end of the beam here cannot rotate nor vertically displace. This is like the beam ends shown in the first diagram of your question before releasing either end.

If the end at $x=0$ was a fixed end, the following two constraints are applied:

If the end at $x=0$ was pivoted, the following constraints are applied:

This type of beam end is connected to nothing: it is free to displace and rotate at the ends. However, no bending moments or shear forces can be transmitted from the end since there is nothing attached.

If the end at $x=0$ is free, the following constraints are applied:

Note that a cantilever is a beam with one fixed end and one free end, and a simply supported beam has both ends pivoted.

Upon setting two constraints to each end, the general solution to the differential equation can be obtained, allowing the vertical displacement, rotation, curvature, bending moments and shear forces to be determined.

A beam could move in 3 axis x,y,z and bend in 3 axis and rotate along the x axis (torsion) . In all and every one of these cases the support can act in a variety of ways, allow free movement, allow no movement, allow resisted movement, impart pre configured hard constraint such as is the case for pre/post tensions re-bars or none flexible pre designed displacement to load the member in a desired setting.

Releasing one end means to release one or several or all of these constrains. I have worked with Risa it is a good FEM software but 25 years ago the version i had did not have a good menu of release. Such as spring loaded constrain, or pre set hard displacement.

1
How to incorporate moment release at beam end in FEM formulation?

1
How to transfer reaction forces of beam to a weld?
4
Why does a continuous beam have less deflection than a pair of simply supported beams?
1
How to incorporate moment release at beam end in FEM formulation?
2
What is the significance of hinge in the internal structure of the beam?
1
What is meant by the rotation capacity of a cross section?
4
What is the difference between plastic and compact cross sections?
1
How to determine the fixed end moment?