I am referring to the answer here:

It seems that on a simple structure 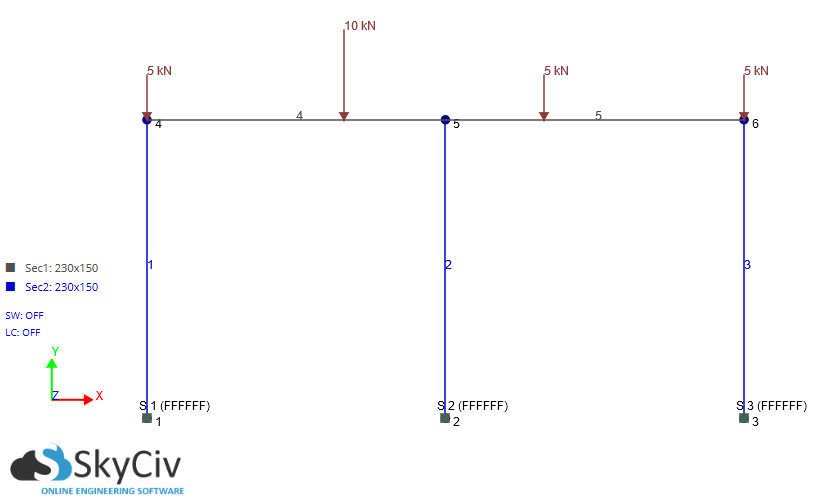 (The diagrams on the left the images below have fully-fixed connections, while on the right the columns are pinned connections to the beams.)

B: The moment on column in pinned model is 0

C: The axial load on column in pinned model is bigger, because the moment is being transformed into axial load (?? is this reasoning true??)

Let me start by answering your second question: models such as this one, which involve only one-dimensional beam elements, are 100% analytical and can therefore always in theory be understood intuitively. There is no "FEM behavior" for such models. Sometimes the models may get complex with lots of bars and whatnot, which may make "intuitive explanations" more difficult, but the result will always be analytical.

Let's start by looking at statement B:

Now, let's take a look at beam 4 in your model (the left-most beam). More specifically, it's bending moment diagram. As you've noticed, the pinned model displays zero moment at the left-most column. This is the very definition of a hinge and is expected behavior. The moment on the beam at the central column is non-zero because the beam itself is not hinged, but the central column is hinged and therefore displays zero moment at the node.

Now, on to statement A, starting by looking at the beam's deflection:

Let's keep looking at the bending moment diagram. The beam equation tells us that

which also tells us that

To answer the matter of the node's displacement, we first need to explain point statement C. For that we need to look at beam 4 in isolation. To do so, we need to replace the surrounding beams with elastic supports which describe their stiffness.

So, basically, the only difference between the hinged and fixed cases is in the rotational stiffness (as would intuitively be expected). This increased stiffness, however, causes the node to pull in a greater proportion of all forces, thereby increasing the axial forces in your outer column and reducing them in the central column in the fixed model.

Returning to the issue of the node's deflections, they are now easy to explain. After all, in the fixed model the column suffers more axial forces, naturally increasing the vertical deflections. But it also suffers bending moment, which generates horizontal deflections as well as a tiny bit of additional vertical deflection.

7
Can I reduce the column moment due to beam, by setting the beam end to pin?
6
Mathematical representation of hinge and pin connection
3
What are the principles (if there are any) behind the conservation of bending moment in frame analysis?