Rule of thumb maximum flow velocity of water in pipes

I have come across various values for maximum flow velocity of water in pipes. At university we were told that 2 m/s is the upper limit where flow becomes turbulent.

In various planning reports I have read recently, 1 m/s is stated as the upper limit. I could calculate the exact velocity at which water in a specific size and type of pipeline will no longer flow in a laminar way, but for infrastructure planning purposes, this exercise is not required. What would a reasonable value for potable water be? Alternatively, what would the value for raw water (river) be?

In South Africa we use the Guidelines for Human Settlement Planning and Design, or what we just call the (Civil) Red Book. This is a really good resource for smaller projects or quick feasibility estimates.

Chapter 9 in Volume 2 is about water supply and and it states on page 24: "Velocities in pipes should be approximately 0,6 m/s and should not exceed 1,2 m/s." This is in line with the 1 m/s you've picked up from reports.

Pipe diameter and material of construction is also a factor. One must take the volume of water into account. With smaller diameters, such as factory reticulation, 1 meter per second is usually the upper limit to prevent hydraulic shock (water hammer), which can destroy some valves, such as butterfly valves.
With larger diameter pipes, such as for wide area reticulation, even 1 meter per second can damage or destroy concrete pipes, so a bypass should be installed to protect valves and piping.

Among mechanical engineers, such as me, a very general rule is about 10 feet per second. https://www.engineeringtoolbox.com/flow-velocity-water-pipes-d_385.html That's when water erosion of metal surfaces starts being significant, particularly when the flow turns, such as in elbows, Tees, and curves in general. It's also when friction loss becomes noticeable and for some elaborate systems of large extent, pumping costs go up. Whether the flow is turbulent isn't of consequence in itself, and it would be nearly impossible to avoid it in most practical systems. Yes, it may be surprising, but water erosion can be a problem, and in general that's different from cavitation, which occurs when the pressure in a liquid becomes lower than the liquid's vapor pressure. Most of that is avoided by keeping the inlet of a pump, for instance, above the Net Positive Suction Pressure (NPSH) specification for that pump. Cavitation can also occur in other applications, such as propellers with liquids. And again, the design parameter there is fluid pressure, not velocity.

The velocity of water varies with pipe diameter, flow rate and nature of materials . Most range is 0.6-1.5m/s .

When modelling district heating network, I came across this figure showing recommended pipe diameters with respect to the flow velocity (of hot water). I hope it illustrates how maximum flow velocity should be considered w.r.t. pipe parameters.

To evaluate the effect of the chosen design guideline, it has been differentiated between four design guidelines. According to Nussbaum et al. [14] different design approaches exist, which are shown in Figure 1. [best2018impact] 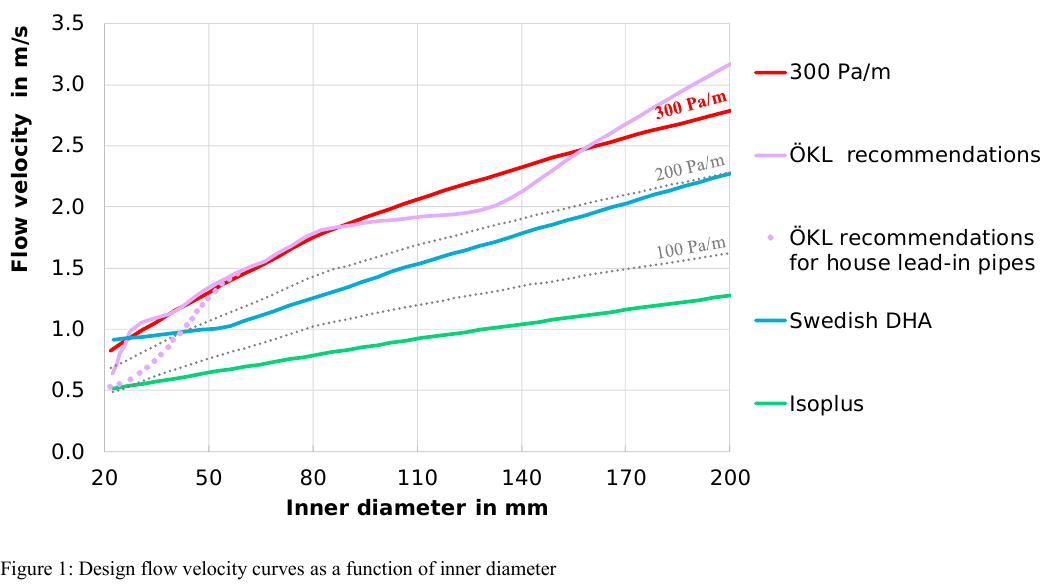 As far as I understand, the reason behind the figure is how Reynolds number is calculated and related to turbulent flow.

Generally we want to limit the amount of velocity in a pipeline. One reason is that as velocity increases, the friction increases which in turn decreases the total energy we are delivering to the end user. This also means that all the money we spent adding energy in the pipeline is simply burned off with the friction.

Another reason is that sudden changes in velocity in a water system can have potentially catastrophic effects but if we limit the velocity then any sudden change in velocity will have a diminished impact on the system infrastructure.

Not the answer you're looking for? Browse other questions tagged civil-engineering water-resources or ask your own question.

2
Monitoring water flow from a pump
4
Finding the velocity of water flowing through a gravel filled pipe
0
How is the Outlet flow rate in a water system controlled?
0
Determining steady flow between two reservoirs with two different pipes in between
3
How to divide the water flow into outlets with equal flow each?
2
Investigating the potential of generating energy from moving water in pipes on a water production site
0
Water flow down a 9% grade for 750' then fills tanks before traveling up 20' over 175'