The vast majority of wind turbines I have ever seen feature 3 blades, as shown here: 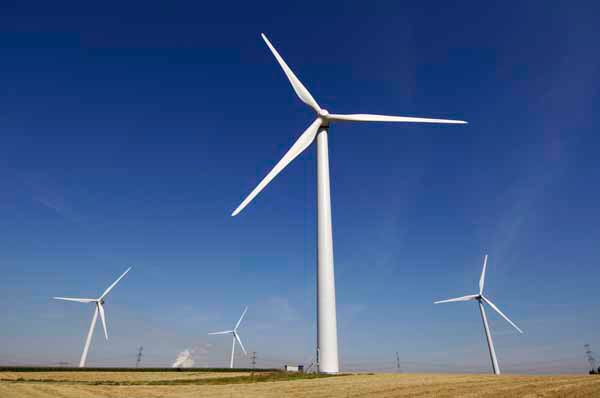 Recently while driving through western new York state, however, I passed by several turbines featuring only two blades, as shown here: 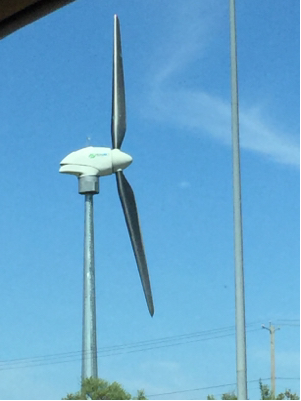 What advantages and disadvantages would a 2-bladed wind turbine have over 3-bladed versions?

A 2-bladed wind turbine is less stable mechanically than 3 (or more) blades.

This unwanted twisting of may feed back into the blades causing them to vibrate. If the speed of the twisting matches the natural vibration frequency of the blades, this could lead to catastrophic mechanical failure. As a consequence of this, 2-blade turbines usually have to be rotated slower than those with more blades, if the wind direction changes, but the wind blowing in an off-axis direction also produces the same unwanted twisting effects. Catch-22!

The hub mechanism and/or the pole itself may need to be designed stronger or stiffer to resist these unwanted twisting forces.

With 3 or more blades, the mechanical behaviour of the turbine is actually the same in all possible orientations of the blades. Even if there are even number of blades, for example 4, there is nothing "special" mechanically about the 90-degree angle between two adjacent blades but economically 4 blades are more expensive to make than three.

The mechanical issues with 2-blade turbines can be "designed out," but the optimum number of blades to generate the maximum power for a given size of turbine is typically 4, ignoring considerations like the extra weight of more blades. As such, a 3-blade design is often the best "minimum cost" compromise between a simple and reliable design, high power output, and low weight.

One of the advantages of two blades over three blades is less materials are required to make the blades.

The disadvantage of a two bladed rotor compared to a three bladed rotor is due to the interruption to airflow and additional turbulence that the pole, that the wind turbine sits on, produces. This becomes apparent when one of the blades is directly in line with the pole. The pole interrupts the turbulence dissipation of the blade that is in line with it. This can increase vibration within the whole system.

Three bladed rotors can produce smoother rotation because they have two blades at the top of the pole when the third blade is in line with the pole.

Not the answer you're looking for? Browse other questions tagged power-engineering wind-power or ask your own question.