I have general problem of understanding how forces are transfered from 3d members problem to plane problem. 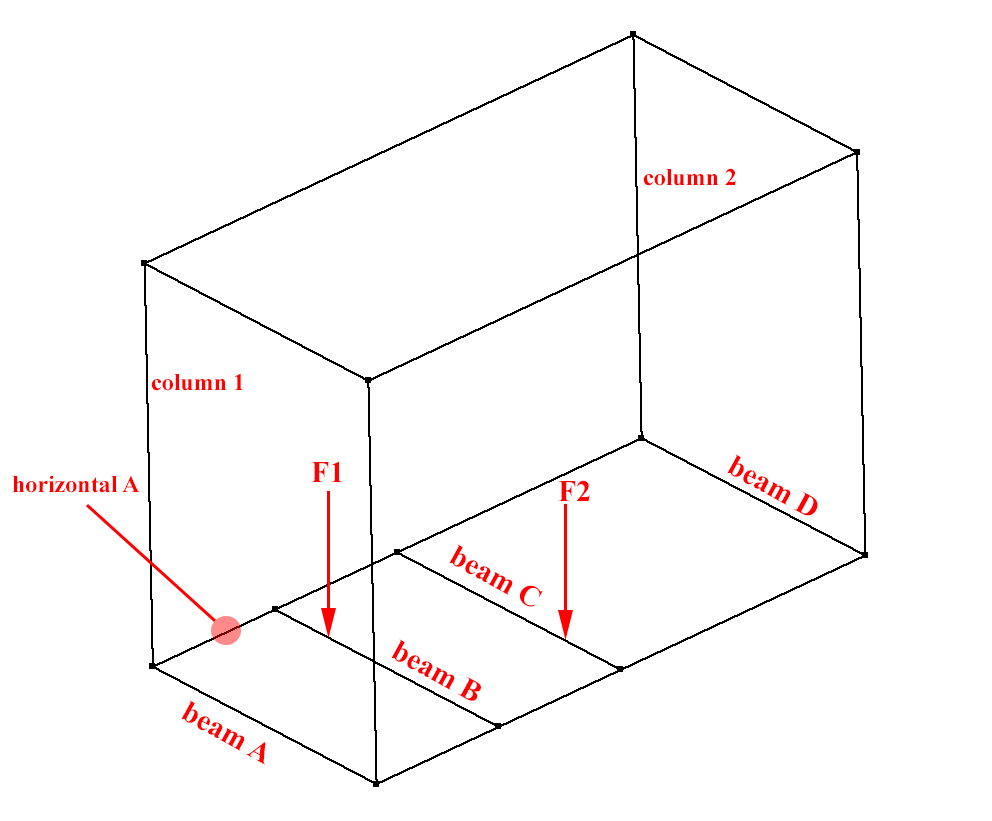 How can I represent horizontal beam A in 2D so I can do calculations of bending moment, shear forces etc.

All joints can be considered as welded.

so reactions are influencing horizontal A (beam C and F2 are igonred for simplicity). Is this OK - With moment Ms1 in plane perpendicular to horizontal A causing torsion of horizonta A.

This is quite a broad question, but I'll attempt an answer (be sure to read the last section if the rest seems a bit daunting).

For starters, it depends greatly on how true to reality this model you have shown us is. Is it really just a box skeleton with some loads applied or is there a slab or some other plate structure which might help to redistribute the loads?

Also, where are the structure's supports (foundations)? I'm here going to assume they're only beneath the columns.

Since all the members are assumed fixed (due to being welded), the torsional stiffness of the "horizontal" bars will create a small rotational stiffness on B and C's supports (which is often ignored, since it's so small).

Once again the doubt regarding the fixity of the model appears: are the "horizontal" beams pinned or fixed to the foundations beneath the columns? If they're fixed, then we need to know how the foundation behaves:

Since the loading isn't symmetric, the angle found for each "horizontal" beam at A's supports will be different. This will impose a concentrated torsion on A's extremities. If the loading were perfectly symmetric, with the loads applied at B and C's midspans, then the imposed rotations on A would be the same at both supports, generating no torsion.

The same applies to the torsional rotation suffered by the "horizontal" beams due to being fixed to beams B and C, as described previously. In this case, this will generate bending moment on A (which won't cancel out, even if the loading were symmetric).

Calculating these concentrated torsions and bending moments on A, you can solve for the internal forces.

Now let's look at the case where there is in fact a slab which may help to redistribute the loads.

The loads are applied directly over beams B and C, which will therefore certainly absorb the vast majority of the loads. However, since the beams are elastic (can deform under load), some of the force can be transferred to the remaining beams as well.

Taking a longitudinal cut (parallel to the "horizontal" bars), we can (over)simplify the slab to the following beam (looking at just one of the forces for now):

Depending on the beams' and slab's stiffness, the fraction of redistribution will change. For instance, here are the deformations and reactions for different beam stiffnesses (the latter case is probably more realistic):

This is a drastic oversimplification, ignoring the influence of the "horizontal" beams, which should also get some load redistributed to them. But it shows how some load can get transferred directly to A. That being said, the load would be transformed into a distributed load along A (or a segment of A), but I admit to not being entirely sure how to adequately make that transformation.

Other than this, the possible load-transfer described in the previous section is still possible: apply the fraction of the load that is in fact supported by beams B and C, get the support reactions, send them to the "horizontal" beams, etc.

Having said all this, it is most likely entirely acceptable to assume that beam A will not be in any way affected by forces $F1$ and $F2$. Whatever transfer there may be, via slab or imposed deformations, will probably be minimal. The examples given above for redistribution via the slab aren't very good. In fact, the proportion is probably closer to a few percentage points being transferred to A at most.

Almost without a doubt, the main thing you'll need to deal with in beam A is the beam's own self-weight (and that of the slab, if it exists).

All diagrams made with Ftool, a free 2D frame analysis tool.

As a first estimate and assuming all the loads and stresses are below working stress limits and assuming the supports are simple pin connection: Beam A support reactions are $$R1=\dfrac{P_b(l-a) + P_c(b)}{l}$$ where $P_b$ is the reaction of beam B on beam A and $P_c$ is reaction of beam C on beam A and $a$ and $b$ are the distance of the beams $b$ and $c$ from the respective ends of beam $a$.

These are available in any engineering hand book or quick charts. However if we were to consider the welds to be fixed joints then it turns into an indeterminate structure!

there are approximate methods or computer programs available but the significant difference is that you have to have the member properties and loads as a starting point of analysis because then the entire structure comes into action and plays some role in supporting the applied load. i.e. If the beam across from beam a is too stiff and connected to two stiff columns with correct welded connections hypothetically in extreme case it can support the majority of loads and let beam a relieved of most of the load. Beam a can even be removed entirely and beams b and c act cantilever from the other beam!

1
How to transfer reaction forces of beam to a weld?
1
How can I model beam column connection that doesn't connect at centerline?
2
Solving truss using method of joints
1
Member weight in a planar truss?
1
Calculating area moment of inertia for a beam with underslung plate?
1
Fixed-Free End Column Design
0
Question on the determinacy of frame structures
0
Reaction forces on a three support continuous beam with two of them requiring compatibility equations. Superposition method done wrong!