Today, we came up with the idea of creating a 3 dimensional matrix where I simultaneously stagger 3 times 5 times 5 Fabry Perot band-reject interferometeric filters with ten degree wide bands of angle of incidence insensitivity , red, green or blue wavelength selectivity as well as optical path difference equal 0 degrees, 10 degrees, 20 degrees, and wavelength in arithmetic progression to cover the incidence angle range of 0 to 50 degrees, the spectrum from 450 nm to 750 nm and the optical path difference range of 0 to 40 microns.

As described in Coutinho et al's paper "Detection of Coherent Light in an Incoherent Background" with URL discovery.ucl.ac.uk/2670/1/2670.pdf, the purpose of the Fabry Perot interferometer is to measure the self-coherence function of the incident radiation to give an interferogram, and uses a narrow band filter to produce the sinc envelope necessary to measure the change in position of the self-coherence function minimum.

In Coutinho et al's paper "Detection of Coherent Light in an Incoherent Background", the authors use an electro-mechanical scanning Michelson interferometer to measure the self-coherence function of the incident radiation. However, the use of an electro-mechanical scanning Michelson interferometer limits the tuning speed required to protect pilots from incoming laser pointer rays within an 100 microsecond interval.

However, in 1999, Brazilian Navy Officer Coutinho and IEEE Fellow Griffith used a Fourier Transform to measure the position of the first minima of the self coherence function. The disadvantages of the Fourier transform are that it requires the processing of a large amount of data and a reference laser is required to calibrate the path difference.

Subsequently, in 2007, Brazilian Navy Officer Coutinho and IEEE Fellow Griffith got rid of the Fourier transform by using Interferogram Phase Step Shift(IPSS) where an interferometer measures self-coherence in the vicinity of the first mimimum with a much shorter scan interval and a signal processing algorithm to extract the position of the phase step function discontinuity in the fringe carrier, proportional to self-coherence. The most problematic aspect of this is that it requires preknowledge of the coherent laser's spectral characteristics within a narrowband width.

@hsinghal pointed out to me that as far as Fabry-Perot filters are concerned they are highly sensitive on the incident angle and wavelength.

Below, I show the formulas for the dependence of the Fabry-Perot filter's reflectivity and transmitivitty coefficients on the angle of incidence courtesy of the European Journal of Physics authors Juan J Monzón and Luis L Sánchez-Soto 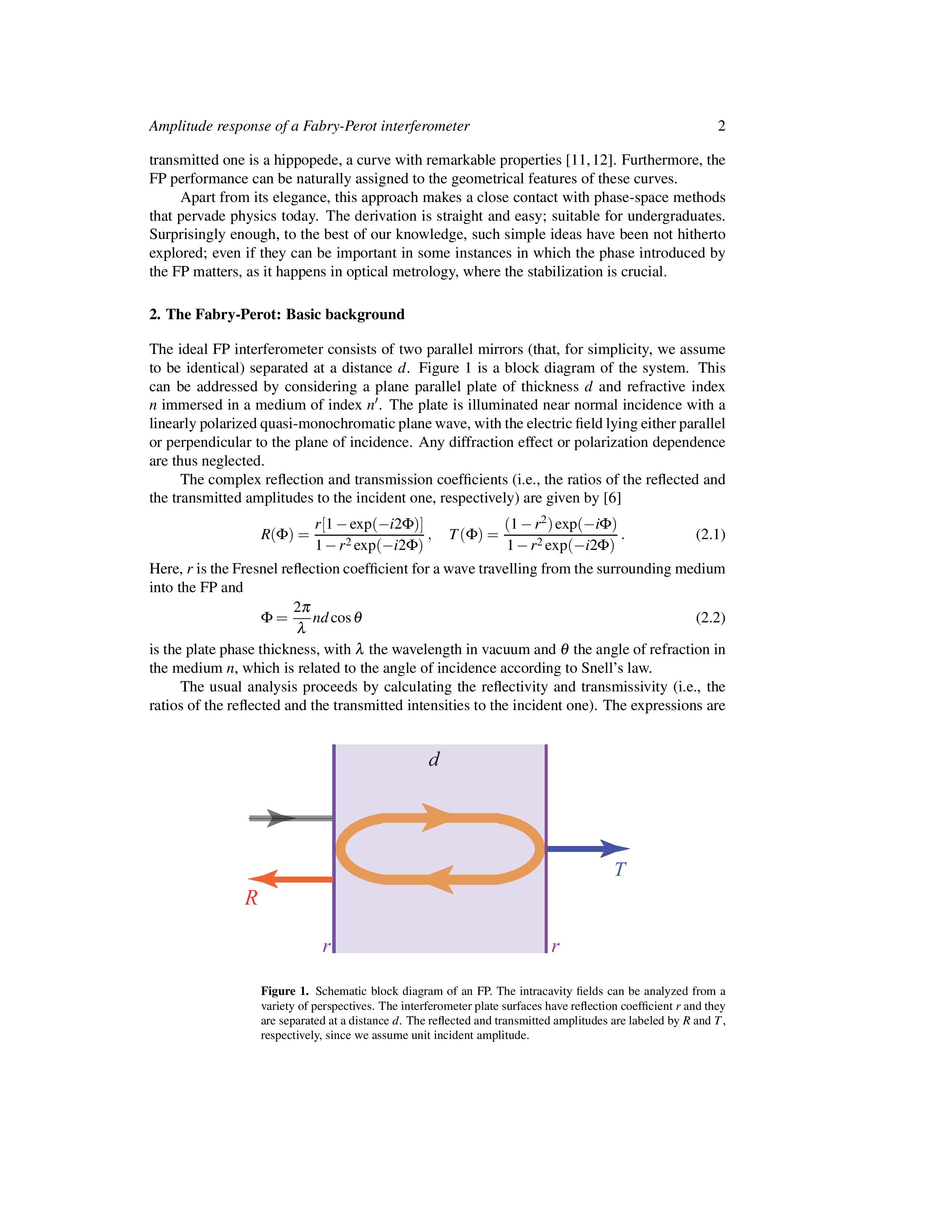 I am hoping to apply Dong Guoyan,et al.'s ideas which the authors wrote in this 2013 paper "Zero phase delay with relax incident condition in photonic crystals(PhC)". with the URL https://www.osapublishing.org/oe/viewmedia.cfm?uri=oe-21-24-29860&seq=0 that "Since the PhC structure can be engineered easily and have more design flexibility, it is convenient to manipulate the frequency and direction of EMW propagating in PhC with zero phase delay by changing the parameters of PhC configuration or the incident angle. Due to the prosperous nanofabrication technology, this method for engineered control of the phase delay in PhCs may have significant potential applications in chip–scale transmission lines, information processing and the design of new type optical devices" to building 10 degree phase delay devices.

I would like to use the transparent Indium Tin Oxide thin film multilayer structure from Christopher J.Stolz's paper Improved ITO Laser Resistance by imbedding within a Fabry Perot filter with this URL [https://www.dropbox.com/s/9h99qzwpm9z6sxd/Scans%207.4.16.pdf?dl=0]. Please remember that you have to create or use a free Dropbox account to view this paper. The reason being is that we wish to deploy such a filter above the cockpit window is to increase resistance to laser damage and minimize the angle of incidence effect where the band rejection filter spectra is shifted.

Increasing the laser resistance will reduce the life-cycle costs of installing a filter to block red, green or blue laser pointers multiple times over a 6 month period.

If you read this article, [https://news.slashdot.org/story/16/07/05/2230241/japan-says-yes-to-mirrorless-cars], Japan Says Yes to Mirrorless Cars, you realize that in a few years Japan will also say yes to planes with Planar(@TM) video displays. As a result, this topology can be installed outside the airplane cockpit window instead of inside the interior cavity of a Boeing 757 cockpit window with 6 inch thickness.

My question is whether I can use this geometrical arrangement of optical devices to band-reject coherent laser light in an incoherent background with 30 db attenuation and 10 nanometer effective notch bandwidth while 1) preserving the out-of-band field of view for pilots within 100 meters of the airport 2) provide wide angle of incidence coverage from 0 degrees to 50 degrees. 3) generating an output image in less than 100 microsecond time

How difficult would it be to fabricate such an 3 dimensional matrix to meet the global demand from the aviation industry?

How might we improve upon the weaknesses in this proposed design?

Because we are sampling the interferogram at 5 unique values of optical path difference , we do not need to find a Fabry Perot scanning interferometers with 100 microsecond tuning speed. Please note that our 3 dimensional array of Fabry Perots and optical phase delay elements can simultaneously handle red , green and blue wavelengths stretching from 450 to 750 nm. 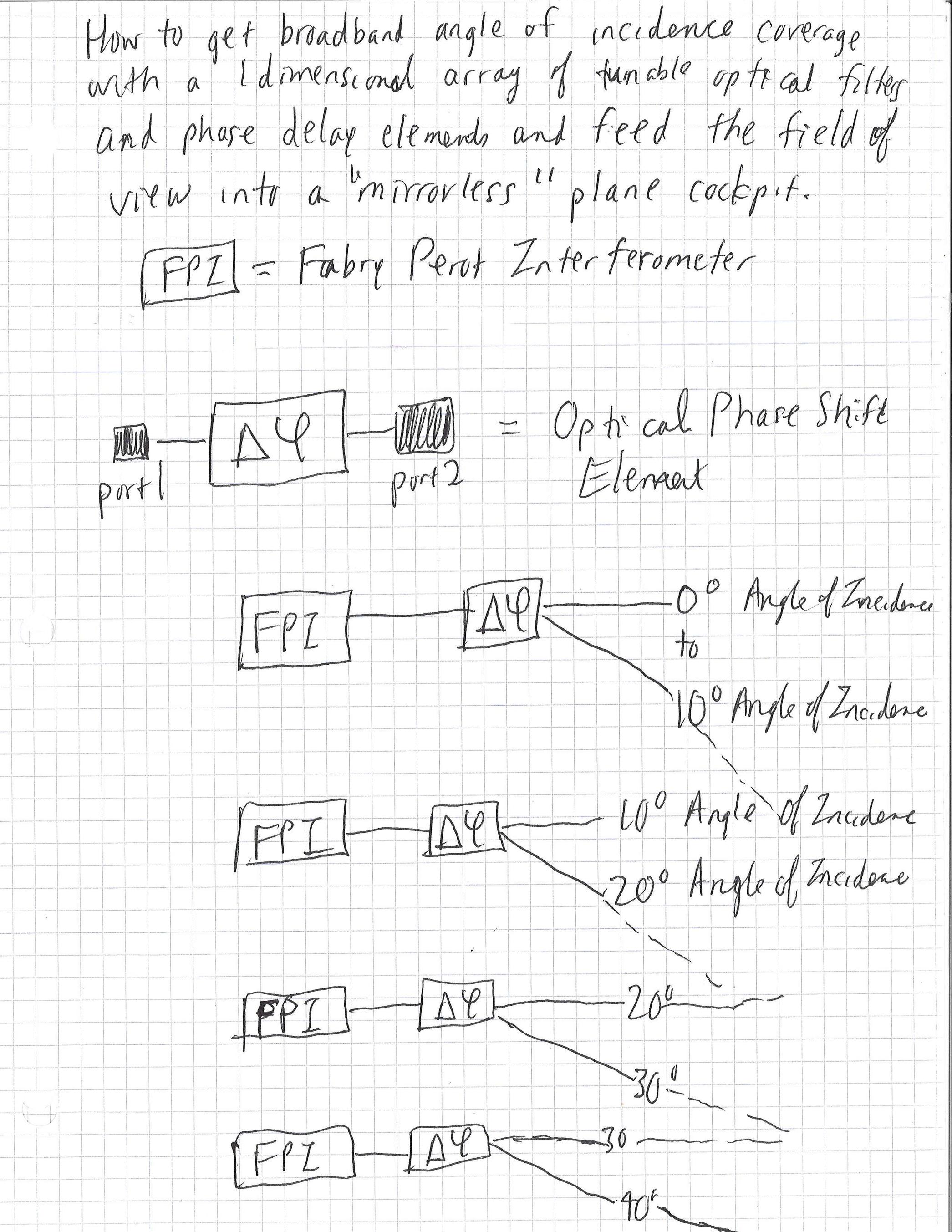 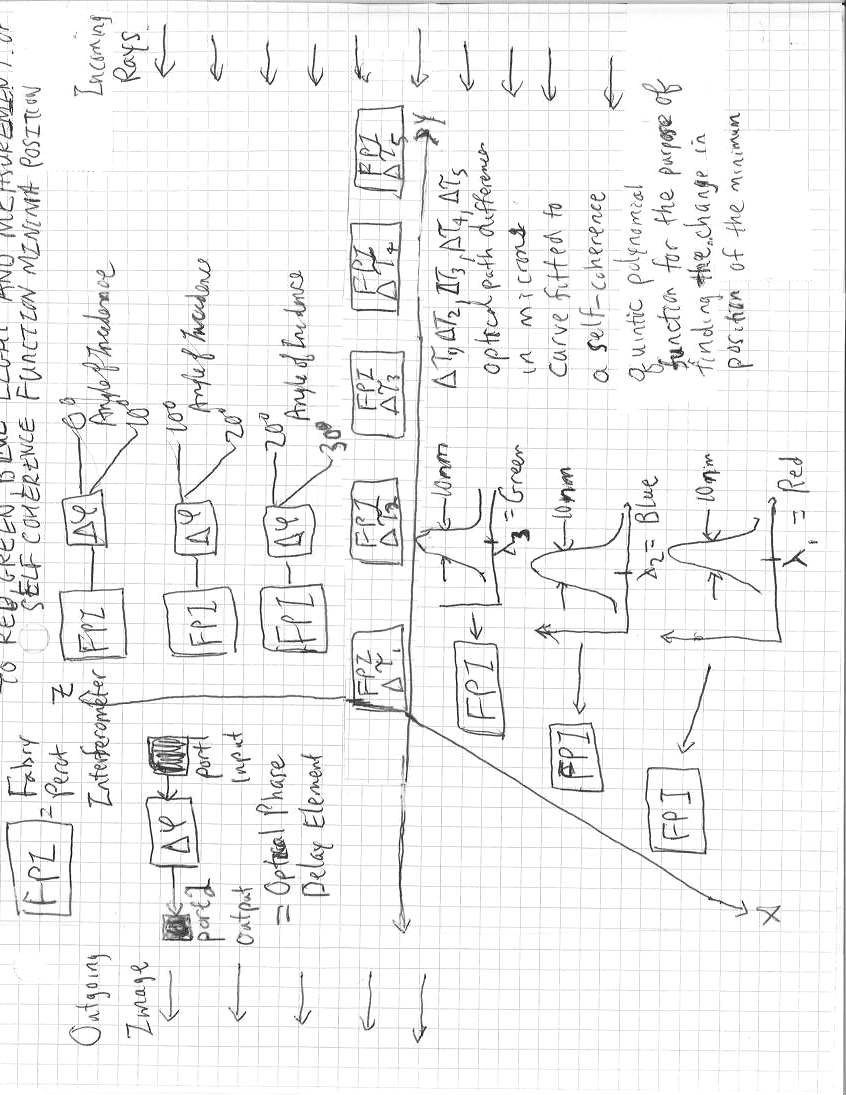 Browse other questions tagged optics aircraft-design electronic-filters or ask your own question.