Does thickness impact resolving loads for an inclined beam?

I have a 3 m x 1 m x 1 m cuboid weighing approximately 10,000 kg. I am trying to resolve the vertical forces that will support the cuboid if the cuboid must rest at a 45 degree angle.

Which of the two solutions below (if either) is best for calculating the resolving forces?

In both cases I assume a 2-D cross section of the cuboid where the resolving forces act at the bottom two corners.

The first method is to treat the cuboid as a beam and the weight as an continuously distributed load. This results in an even distribution of the load between the two resolving forces being even irrespective of the angle.

The second method is to assume the weight to be a point load at the center of mass. Then use the sine rule to determine the position the force acts along the base line of the beam. This gives an uneven distribution of the loads with weighting slightly towards the lower corner but seems to be dependent on thickness.

I am reasonably confident it is the second but I want to know the mathematical explanation. 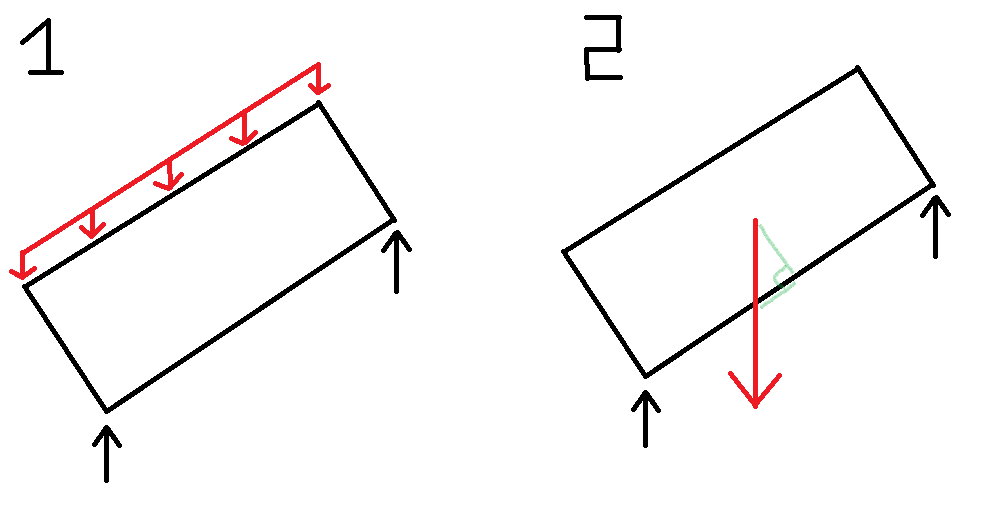 The more exact solution is the second one. Usually beams aren't very wide or high compared to their length, so if they are inclined, taking their self weight as a linear load is acceptable. As you mentioned, the distribution of the load depends on the height of your cross-section and on the angle of your "cuboid." You can see this by making an extreme case where the right reaction needs to be reversed to hold up your cuboid:

In this case it is clear that the linear load would not apply. If you want to resolve the reactions, simply do a summation of your vertical forces (only dead weight at the center of mass) and a summation of moments.

We usually disregard the small change in CG of the sloped beams but in this case the change is significant and only your 2nd option is correct. 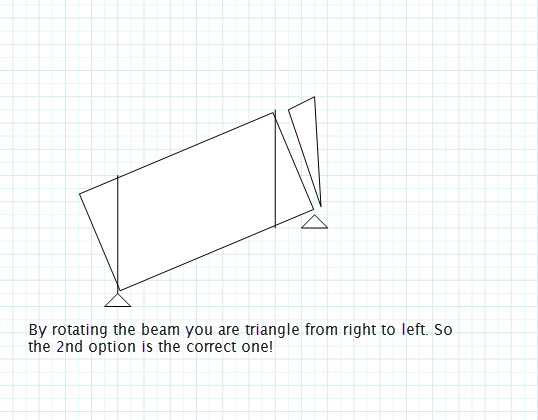 5
Does the length of a beam change upon deflection?
9
Why does filter efficiency decrease with thickness?
2
Timoshenko Beam Theory for Quasistatic Cantilever Beam: Shear Term
0
How to calculate beam impact problem
0
Why does the 1kg mass move towards inclined plane here?
0
How does one conclude that the beams in this problem will be inclined?