The Bailey Bridge panel bridge system has been around since WWII. It has been credited as being one of the top 3 technological advancements that allowed the allies to win the war. After the war, the surplus of Bailey Bridge parts were sold off and distributed around the world. While these bridges were intended to be for temporary use (military temporary use and civilian temporary use are two different things), some of these old bridges can still be found in use today. 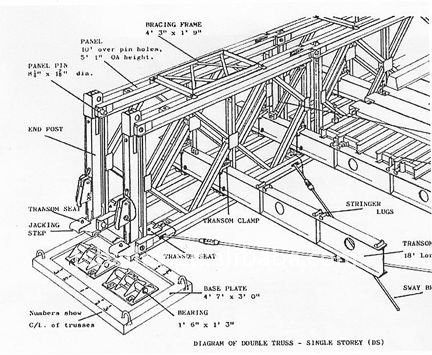 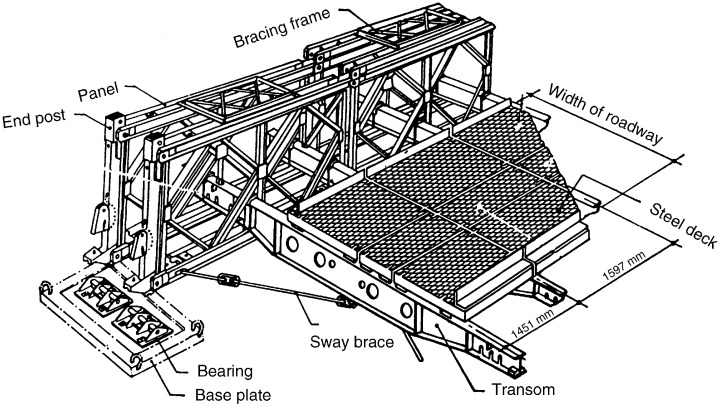 A quick search on google will return all sorts of beautiful modern bridges that are not Bailey Bridges. To me, a Bailey Bridge is a very specific type of panel bridge from WWII or post war sold by Bailey-Uniflote. However listening to colleagues, and even looking at the google search results, it appears that Bailey Bridge is just another word for Panel Bridge. Similar to Xerox and Photocopy, or Kleenex and tissues. So this has muddy some of my search efforts thus far.

The problem I face is trying to determine which of the 4 (maybe more) types of panel bridge systems I may be looking at as they can be very similar in component layout at a quick glance and even some basic measurements.

So far my research has told me that some of the distinguishing factors for these panel type bridges are:

In the Bailey Bridge panel there are two diamond shapes. The diagonals of these shapes were originally I sections. At some later time these sections changed to C-Channels and rumour has it HSS or tube sections were used by certain manufactures. Anyone have any confirmation on how to identify or rule out potential bridge type based diagonal section type? Maybe even some date ranges for the various section type?

On a Bailey Bridge, the transoms are located adjacent to the panel's end vertical and middle vertical. This can been seen in the following diagram and photo:

If the transoms need to be double up to carry a heavier load then there are 4 transoms per bay. Two either side of the middle vertical and 1 inside of each end vertical as shown in the following photo:

For an Acrow 300 style panel bridge, the transom is located at the base of panel's diamond as seen in the following photo: 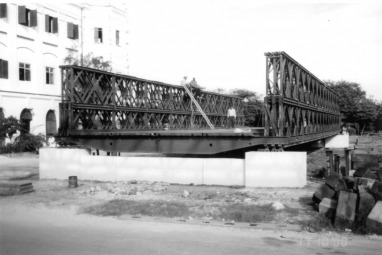 What are the key factors that distinguish Bailey Bridges?

So far I can only tell Acrow 300 by its transom position.

Just found this really nice write up on the Bailey Bridge but it still does not completely answer my questions.

This is well after your post but may answer some of your questions.
I was an engineer in Papua New Guinea durng the late 1970's early 1980s when Mabey began supplying Compact Bailey (now Compact 100), and we had a fair bit of older bridging to the "standard" design as well. At the time we used the data from the Bailey Uniflote book, but even then we had issues, as tables of available live load were not transparent on true capacity - they assumed a lowish dynamic load factor and were calcualted using working stresses. We tendered the supply (with Acrow and Mabey competing - well before the Chinese and Indians started supplying) based on the standard capacities. I don't recollect how much extra the Compact gave, if any, but they were only purchased in competitive tender against the standard Acrow product so we took no account of any extra capacity even if they had it.

Anyway, these days we still find ourselves occasionally load rating them and we still use the same approach - that is we use the data for the standard Bailey via the live load capacity tables, adjusted for dynamic factors and anything varying the dead loads. I believe, despite all the alloy and section changes, that the panels were designed to meet proof loading requirements, so in the end it still comes back to the table ratings.

We have only seen one compact among about a half dozen we have encountered - you can tell them easily by the absence of the transom clamp - the compact has a "permanent" bolted end. We treated it just the same.

3
How and WHY does the tension in an arch dam or bridge change as the degree of curvature and radius of curvature change?