What makes something like water so hard to change its density?

So I'm taking a compressible flow class soon, and I've been thinking beforehand about the topic. A substance like water can easily be pressurized, but its density doesn't change easily, meaning there has to be some microscopic force between molecules in equilibrium with the pressure force. What force would this be though? Would it be Van der Waals force perhaps?

Two factors contribute to the incompressibility of liquids. The first is the electrostatic repulsion between the electron fields of neighboring molecules keeping the molecules from getting closer to each other without increasing force. The second is that intermolecular spacing is similar to that of solids made from the same material, due to intermolecular attraction and in turn due to some form of secondary bonding.

Note that no conventional material is totally incompressible, and greater hydrostatic force results in higher density. This is reflected in a material's bulk modulus, and the relationship between hydrostatic stress, bulk modulus, and volumetric strain. For example, water has a bulk modulus of approximately 3.12 GPa, meaning that an application of 3.12 MPa hydrostatic stress would result in a volume decrease of about 0.1%, and thus a density increase of close to the same amount. Other liquids have similar bulk moduli. For many applications this is a negligible change and can be safely ignored, and hence liquids are generally treated as incompressible.

For comparison, I found a table of some compressible liquids. I don't know the original source. Just look at Hg!
BTW, I've seen notes indicating that liquid H and He are pretty compressible, but a quick search didn't turn up easily translatable data. 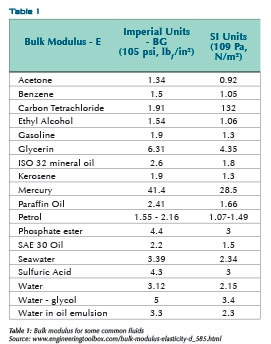 Not the answer you're looking for? Browse other questions tagged fluid-mechanics compressible-flow or ask your own question.

12
What makes the material travel through Archimedes' Screw?
4
What is a tesla turbine and how is it different from other turbines(like pelton or francis turbine)?
5
What will happen if I run a submersible pump without water?
2
What type of fountain nozzle ejects water in an oval shape?
4
Determining mass flow rate and exit velocity of compressible flow
3
How does an oscillating sprinkler like this change directions?
2
What materials absorb water and release it steadily when compressed?
0
What should be the density of a compressed gas while measuring the flow rate using Rotameter?
0
At what negative pressure do gases separate from water?