Why does compressed air energy storage use intercoolers?

Why do CAES systems have intercoolers after every compression stage?

Isn't it a waste of work, since the air will cool anyway in the storage cavern?

Not just CAES system, intercooling is desired for multi stage compressors in general, if you checked this diagrams of isentropic, polytropic and isothermal compression processes between the same pressure limits you can see that the curve that requires minimum power (area to the left of the process curve) for the same inlet and outlet conditions is the curve on the left (isothermal compression) 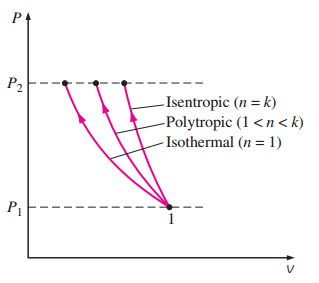 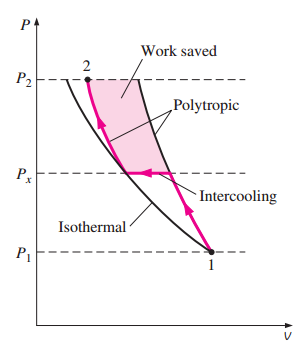 Isn't it a waste of work, since the air will anyway cool in the storage cavern.

I hope it's clear now that it's not a waste of work (at the contrary). And it won't be much of a storage system without a proper thermal insulation to minimize the heat loss during the hours of storage.

(Figures are from Cengel's book of Thermodynamics - An Engineering Approach)

It would be a waste of work, if the air did not cool in the storage cavern!

But as you say, it does cool, hence you'll have less pressure available when expanding the air than the pressure you needed to work against when compressing it. The excess pressure could be avoided by compressing in isothermal mode, and as Algo said you approximate isothermal by putting an intercooler between two isentropic compressors.

Not the answer you're looking for? Browse other questions tagged energy-storage or ask your own question.

7
Is compressed air energy storage economically viable in the home?
9
Air compressor that doubles as a pneumatic motor?
1
Energy density of "heat storage ceramic" vs. NMC li-ion batteries
7
Calculation of the stored energy for a heat storage tank
2
How do I properly store lead-acid batteries?
0
Why no big and slow flywheels for utility-scale energy storage?
3
Inerting system for biodiesel tanks?