How can we assume that structural supports are rigid?

In engineering classes we made the assumption that structural supports (fixed, roller, etc.) are rigid. Thus, the displacements of a beam ,for example, at a fixed support are set to zero in the horizontal and vertical directions as boundary conditions. However in real situations shouldn't there be some displacement due to deformation in the support? Wouldn't that affect stresses/strains in both the beam and the support considerably?

Like many things in engineering this one often comes down to a judgment on if this effect is signficant. By significant we would mean does it change the results enough for us to worry about it.

A few examples may be worth considering.

Some other cases which displacements of the supports would be considered:

I recently saw a picture on Facebook of a t-shirt quite similar to this one. 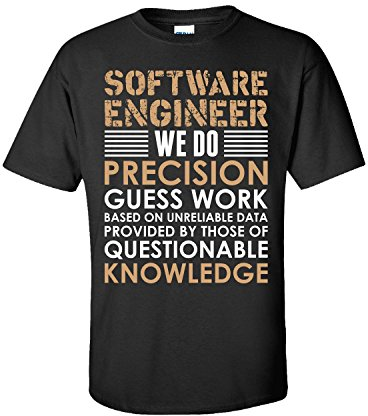 This is as good a definition of engineering as any. And that's because you are correct.

To say that any support is perfectly rigid is a lie, since there will always be some deformation of the support. But, then again, stating that a material is perfectly elasto-plastic (Hooke's Law) is also a lie, since micro-imperfections will always make a member deform in a slightly chaotic (as in, not perfectly predictable) manner. Euler-Bernoulli beam theory is a lie since it ignores shear deformations. Timoshenko beam theory (which does consider shear) is also a lie, since it considers perfectly elastic material behavior, which we saw above is a lie.

There is not a single "theory" (in engineering) which is not a lie, and that is simply because engineering doesn't care about providing a perfect description of reality. Engineers just want a theory that's good enough.

And that's why we usually consider supports to be rigid. Because it's a simplification which makes our lives infinitely easier and which is good enough.

Could you create a complex model, where you consider the stiffness of the columns? Sure. But the columns are resting on the foundations, so you'll need to consider the stiffness of those as well, and they are resting on the soil, so you'll need to consider the effect of that as well. There comes a time when you need to decide whether it's worth it. Is the deformation of the supports really going to make a difference?

If you have reason to believe that your supports may be significantly flexible (for example, your foundations are resting on a complex soil), then yes, you absolutely must consider the effect that will have on your structure. If, however, there is no reason to believe the support's deformations will be all that relevant, then, well, it's not relevant and there's no reason to consider it.

And, as a detail, in the simple case of isostatic structures (such as simply-supported beams), small support deformations don't cause any stress increase at all. Well, actually, that's a lie since it arises from Euler-Bernoulli theory. But if you pretend that Euler-Bernoulli is true (you really should), then yeah, no internal forces emerge.

Depending on the level of engineering course you are taking, as previously mentioned this can be a simplified case, and most engineers love to keep things simple. In addition, if you start tossing in various movements, your solution for the beam can go from being statically determinant to indeterminant. As a result you may not have the math courses or engineering formulas developed yet to handle those situations. You will eventually come across differential settlement where one or more supports will drop by different amounts. In addition you will be taking on cases where both end of the beam are restrained and the beam contracts. These are real issues that as a structural engineer you will deal with. And at that time you will have your complete degree to help you, along with analysis programs, and a myriad of resources available on the net and elsewhere to assist you.

13
Why do we even use engineering stress?

7
Are standard structural bolts acceptable for all cold climates?
9
Can the structural integrity of bridges be measured in real-time for safety?
7
How do you model a real-life truss in structural analysis software?
1
How can I model beam column connection that doesn't connect at centerline?
2
Why conduct experiment for load distribution within three triangulated structural frameworks when you can calculate theoretically
2
What can a licensed Mechanical Engineer do in the civil/structural field?
0
Why can we assume the stress distribution under a pad footing to be linear?