Understanding net torque from an actuator

This will probably sound like a silly question, but here goes....

Let's say I have an actuator, with a torque rating of 1 Nm. I then connect it to a wheel, which starts rotating at a constant speed. From Newton's second law, I know that Net Force = Mass * Acceleration, or in this case, Net Torque = Mass * Angular Acceleration. Given the input torque of 1 Nm, this would mean that the wheel would have a net torque of 1 Nm applied to it. Therefore, the wheel should experience an acceleration of 1 Nm/mass. However, the wheel doesn't keep on accelerating -- it just rotates at a constant speed. So why doesn't the wheel accelerate, when the actuator is applying a fixed torque?

There are two things going on.

First, even if this "actuator" can produce constant torque, the torque required to keep the load spinning will be at least in part a function of the spinning speed. There will be some friction and other forces that increase with increased speed. Viscous friction increases linearly with speed, and other effects, like air resistance, increase even more strongly with speed. Therefore, even with constant torque, eventually the friction forces rise to exactly oppose the torque and the object no longer speeds up.

Second, your "actuator" probably can't supply constant torque, even over its rated speed range. For a electric motor, for example, torque decreases with speed at a fixed applied voltage. The motor has a finite unloaded speed that is mostly proportional to applied voltage. That is the speed at which it's externally available mechanical torque drops to 0.

The torque rating for the actuator depends on the speed it's running at - as it approaches its "top speed" it can't deliver the full rated torque.

The reasons depend a lot on the actuator type. For example with a DC electric motor the coil induces a back-EMF at higher speeds causing a tail off on the torque curve. For other actuator types there will be other losses which affect their performance. (All in addition to friction in bearings, etc.)

The torque rating of the motor is basically the maximum torque that the motor can generate, generally at standstill(ie. 0rpm).the performance characteristics of a dc motor would look like this 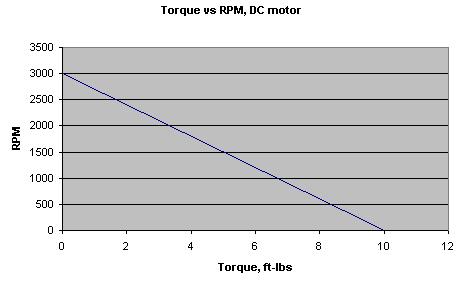 4
Optimising driving speed of stepper motor for maximum acceleration by trial and error
9
How does load force impact load inertia?
2
Using a PID to control rotation
2
Calculate maximum acceleration of a car from rest (optimum launch)
1
Motor, a gearbox and a drum with a cable lifting a mass
0
Break loose torque calculation of lock nut against rotating/acceleating bolts?
8
Moment equation from dynamics differs with equations from physics & statics. Where did I go wrong?
0
Doubt on a shaft-turbine-generator system