Replacing a straight rigid link by a curved rigid link

Suppose we have a horizontal rigid bar hinged at one end to the wall. An inclined straight link hinged at one end to the same wall, is pinned to the rigid bar at its center. A load P is acting at the free end of the horizontal link. For static analysis we draw the free body diagrams for both the bodies and equate the net force and moment to zero. How will the static force analysis change if we replace the inclined straight link with a curved link? Will it depend on the nature of the curve?

I understand your structure is as follows (where the circular version is just an example of a "curved" link):

One thing that is clear is that this structure is isostatic, therefore the external reactions will be equal in both cases. However, the internal forces within the bars will obviously change due to the change in geometry. In this example, for instance, here is a comparison of the forces in each case (obviously dependent on the actual forces and dimensions): 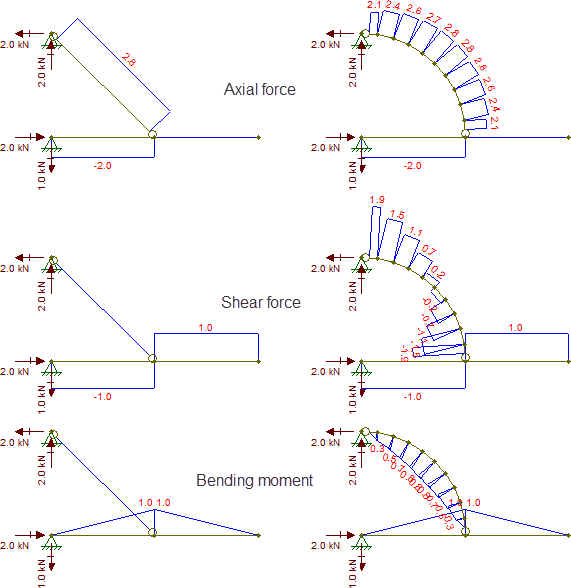 In both cases, however, the horizontal bar presents the same internal forces.

This depends whether you are just talking about a rigid body diagram/model where the structure is idealised. Here it is normal to assume that any links are perfectly rigid and massless and the model is only interested in the distribution of forces (as opposed to stresses or deflections) in the structure or mechanism and the relative position of point nodes.

In this case it doesn't really matter what shape the links are as the forces will be transmitted between nodes just the same regardless of the path the links follow as long as the points they join are the same.

Where you may well start to see significant differences is in situations where you have high strains and strain rates and where dynamic forces and vibrations are significant, fro example in something like a cricket bat or golf club as opposed to something like a linkage in a hydraulic digger.

6
Fragmentation of a curved cantilever beam under compression